A lovely day in Montenegro. You know Montenegro — it’s the tiny country whose prime minister Donald Trump shoved out of the way so he could puff out his chest and stand in front of all the other world leaders at the recent NATO conference. That Montenegro. I was kind of afraid to eat in the local restaurants, thinking someone might spit in my food. I couldn’t blame them.
I got up, meditated, and just sat on the balcony looking at the fairytale town crouched at the foot of the hills rising from the sea. 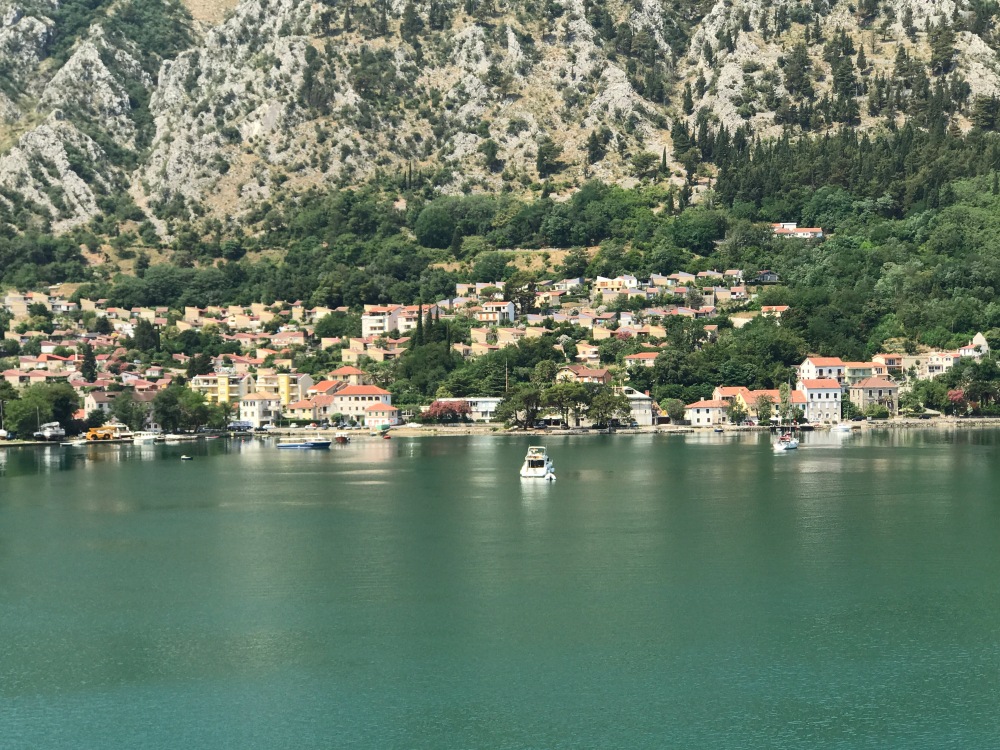 And then I made a dumb mistake. Jerry came in with some fruit and a smoothie for me and I downed them before remembering the pig pills. I had a stomach ache within the hour and it got worse with the day.  🤢

But we were in Kotor, Montenegro, and I really wanted to see it so out we went. We were tied right up at the port so it was an easy walk across the street to the old walled city.

It was a lovely place. No cars, tiny alleys and crooked streets, cool churches, souvenir shops, and a few expensive boutiques. 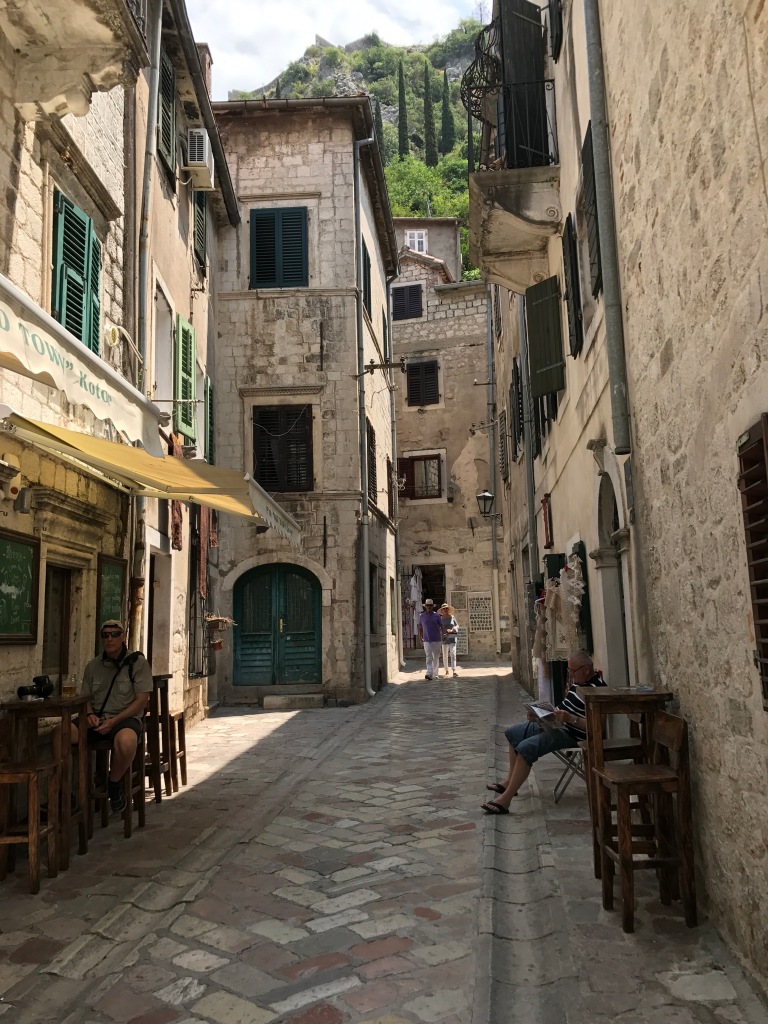 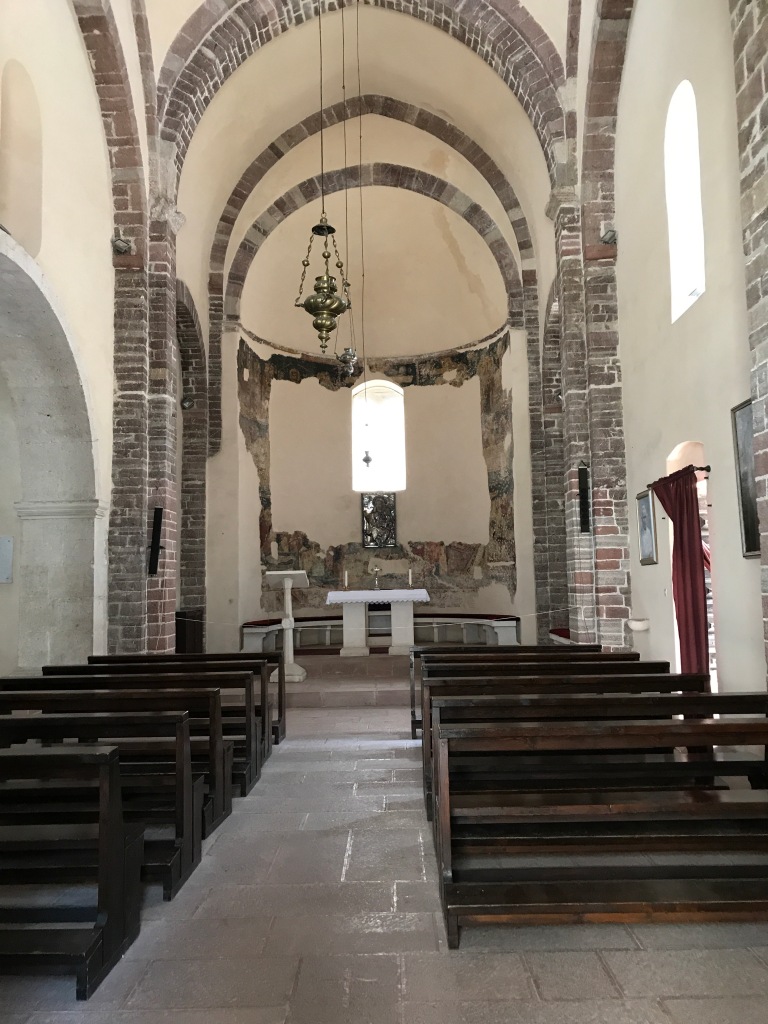 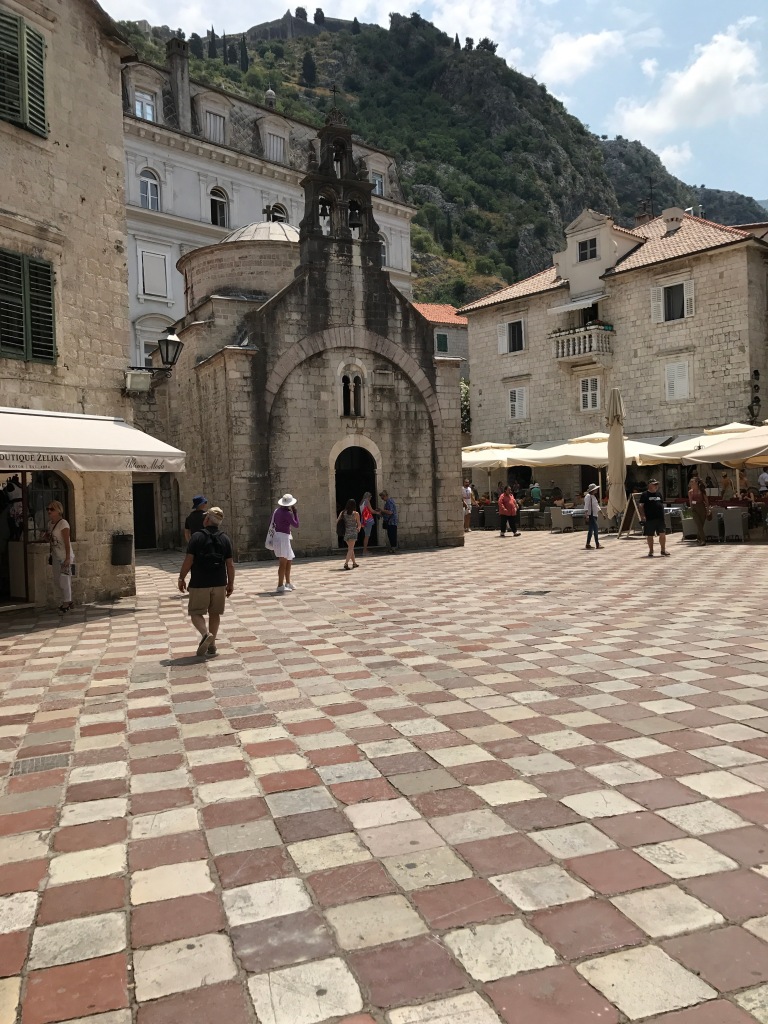 Kotor appears to be in love with cats.

There was a cat museum, dedicated to cats. Many shops sold cat teeshirts or funny cat cards and had cat food bowls in front. Cats lounged around the town pretty much as though they owned it. And pretty much they did. They lay in the sidewalks and the store doorways and people carefully stepped over and around them. 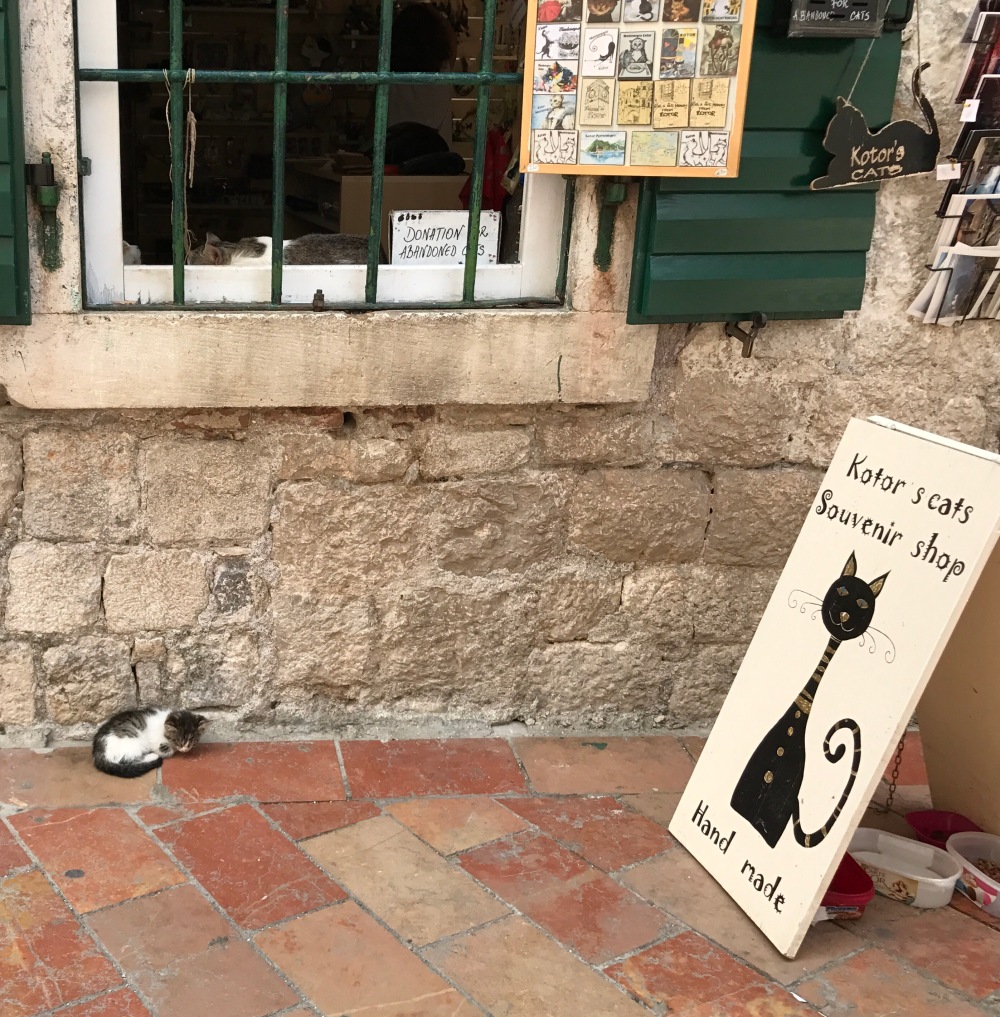 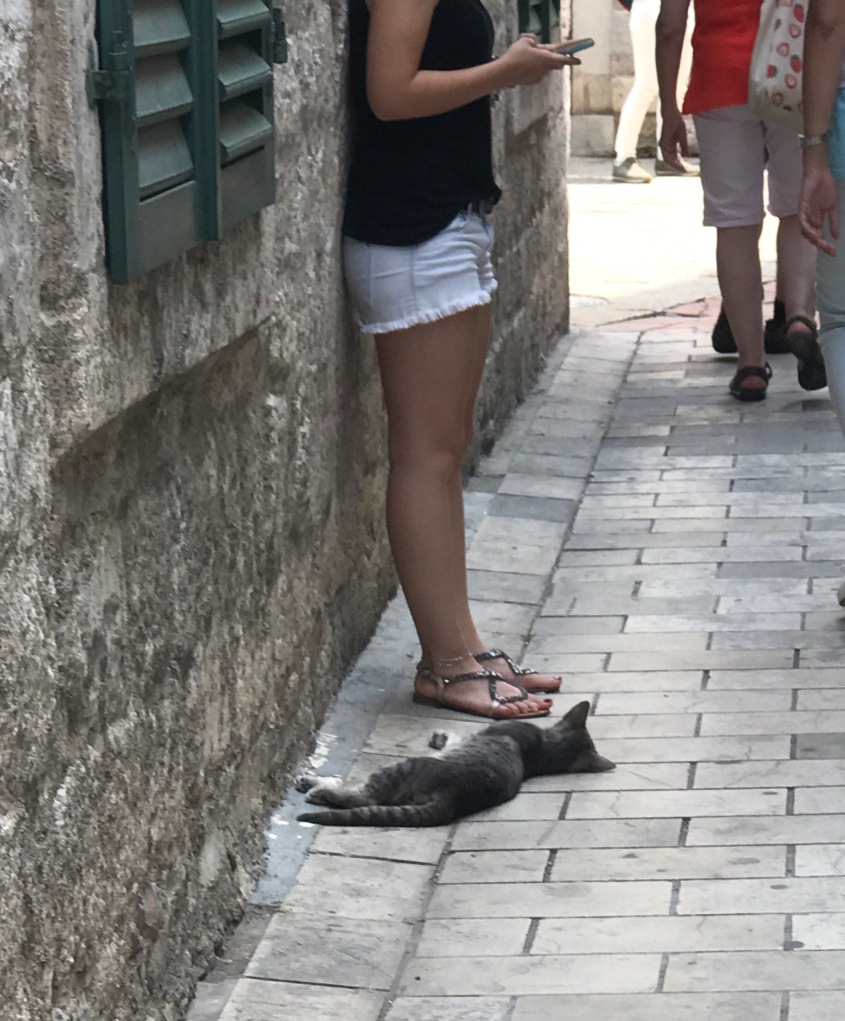 I saw a sack of cat food lying in a ditch, half full, for any cat who cared to stop and dine. I like cats, but this was weird. Nice, but weird.
The other day when I listed the reasons I like to cruise, I started a list in my head of reasons why I don’t. One of them was forcibly visited on me today. When a ship arrives in port, it disgorges all its passengers who care to get off. If the port is a large city — say Barcelona — the crowd is absorbed. If it’s a little city, like Kotor, then suddenly the place is wall to wall tourists. Since two ships arrived at the same time today it was nuts. I am sure Kotor is a beautiful place when it is empty. On the other hand, the locals tell you they depend on the tourists. Come the winter the place is empty and the money dries up. Complexities of life.
I had searched out a lunch place ahead of time and fortunately it wasn’t inside the old city walls that held the heat like an oven. We strolled round the harbor and walked past a market with some of the most stunning produce I have seen. 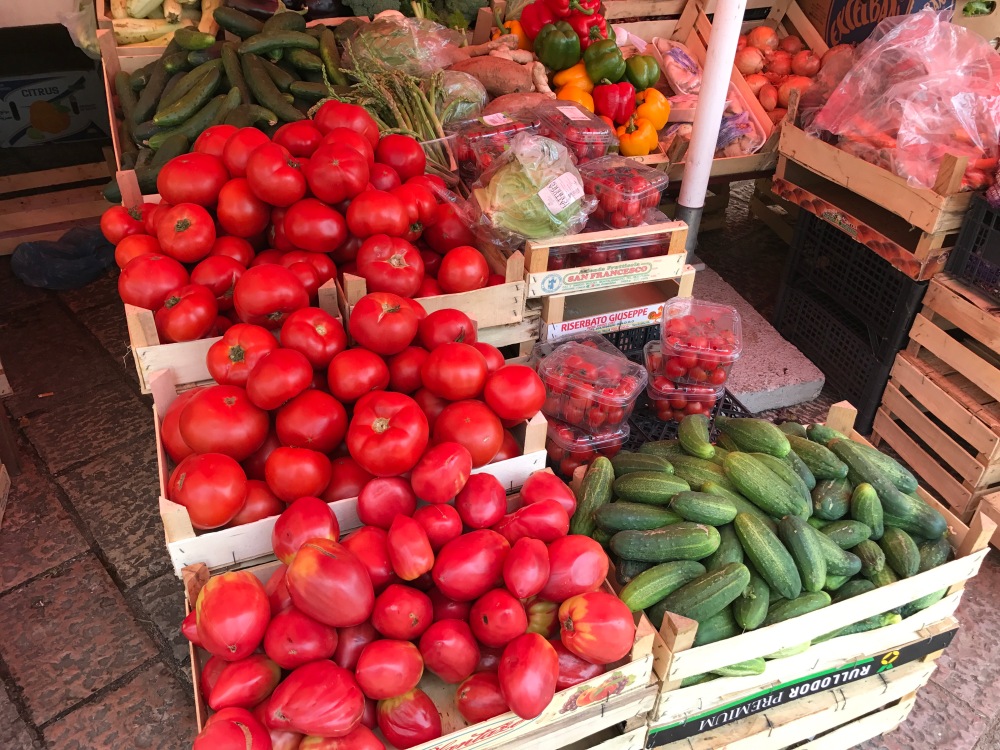 It took a little finding but finally we sat down at Galeriya in the shade.

It was informal and lovely and not filled with tourists although it was filled with smokers. Even though we sat outside along the harbor it was pretty smoky and chokey.  We got to sit and watch our ship to make sure no one ran off with her before we got back. 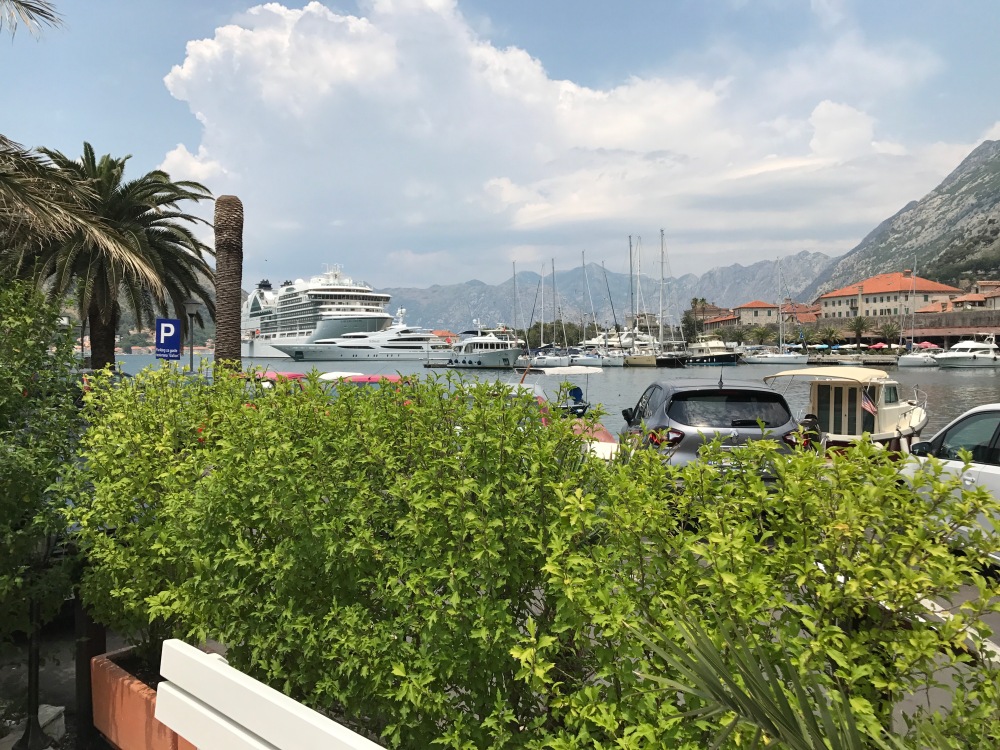 The waiter was great. He suggested we get the catch of the day (a choice of snapper, sea bass or sea bream lying, clear eyed and freshly caught on a bed of ice.). 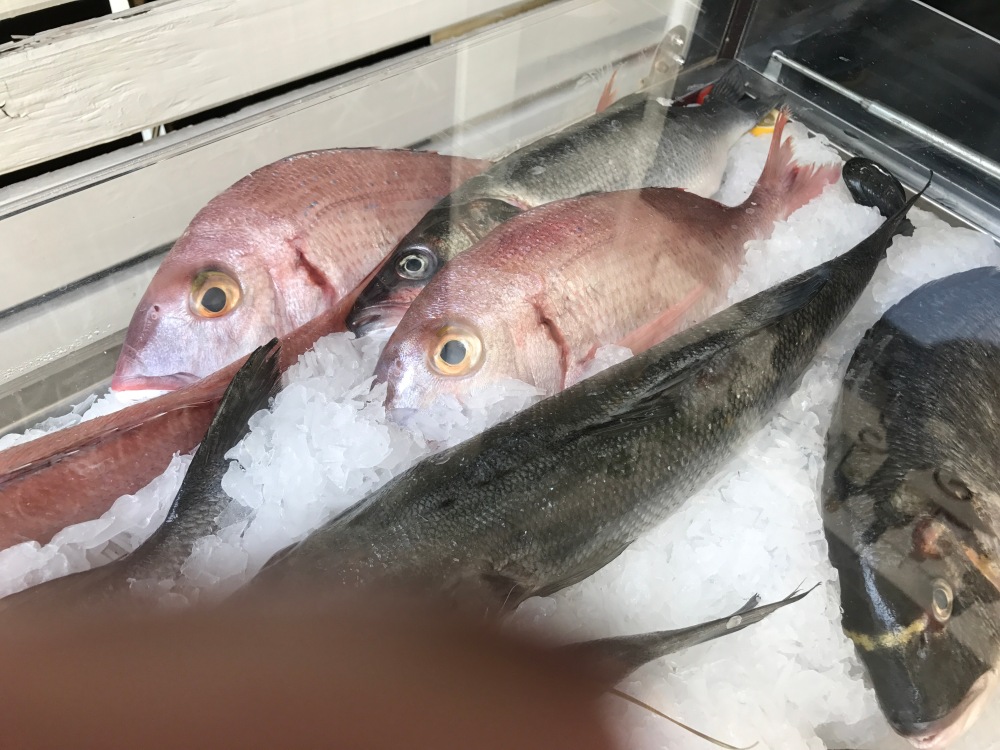 We ordered domestic olives and cheese and salad to start. The olives were good — astringent and meaty. I asked about the types of cheese and pretty much they amounted to cheese cured in olive oil and cheese smoked. Since he pronounced it smoke-ed it sounded much more exotic than it tasted. Both were bland white cheeses. 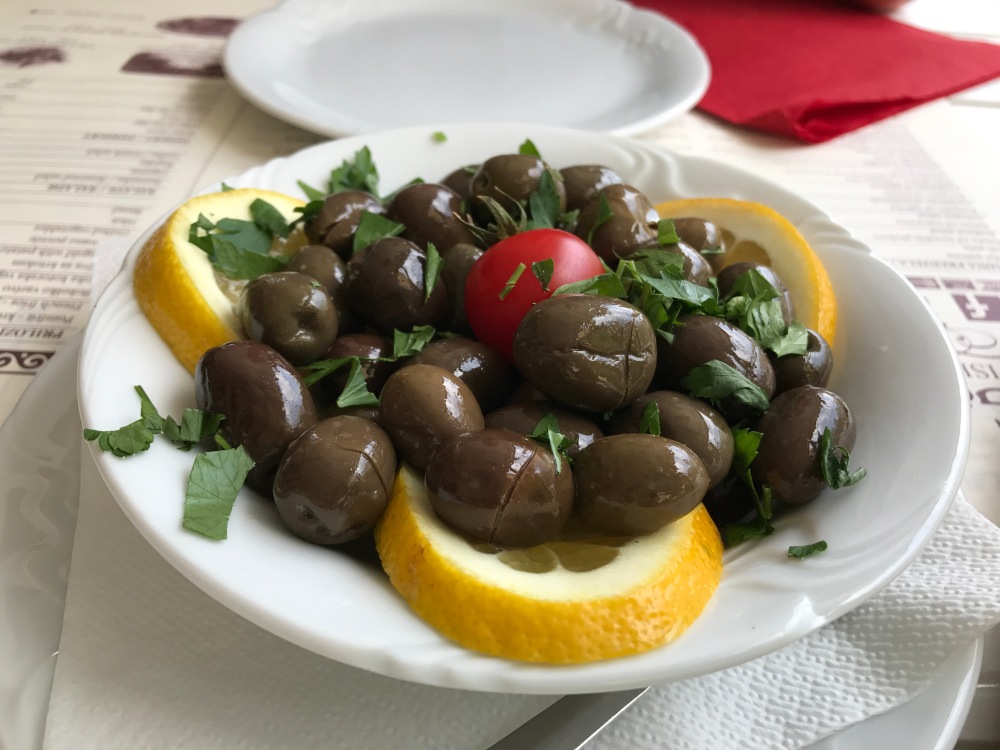 The cheese that knocked my socks off, however, was the feta in the salad. It wasn’t my favorite, which is made with goat milk, but it was the best sheeps milk feta I can remember eating. We asked the waiter where it was from. Serbia, he said, pointing vaguely at the hills. The best feta came from a small market town in Serbia. Who knew? Anyway, good stuff. 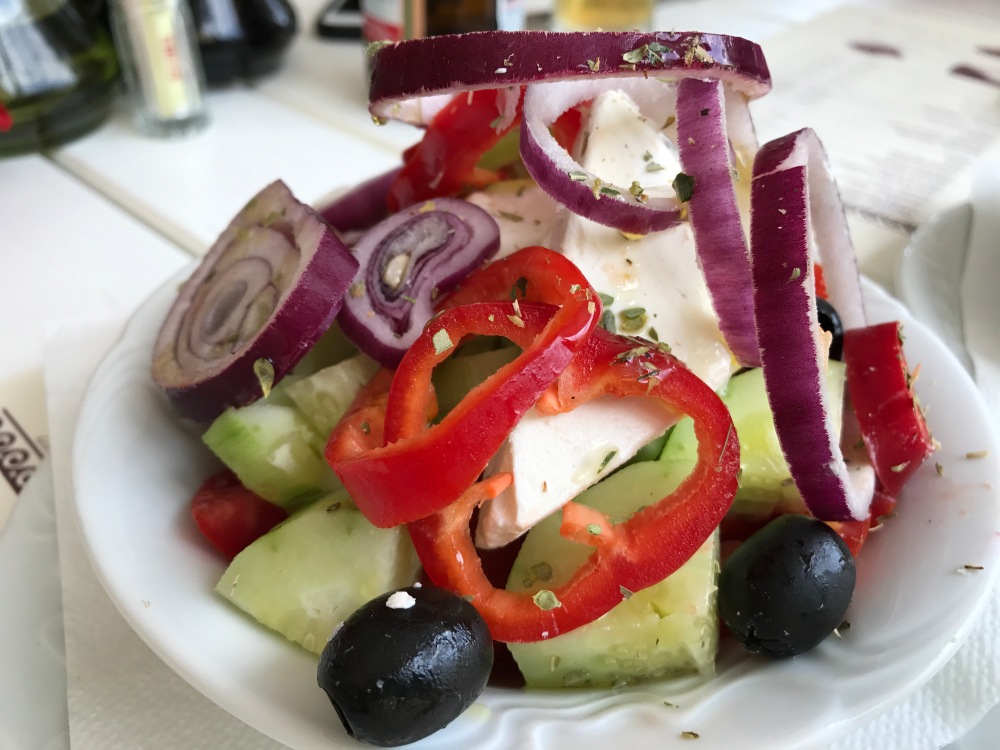 The fish (we chose snapper) was absolutely fantastic, grilled simply and lavished with garlic oil, a small bowl of which was served alongside, in case we thought we might be meeting vampires later in the day. The fish, expertly filleted tableside was surrounded with grilled vegetables, potato salad, spinach, carrots and French fries. I ignored the fries as by this time my stomach was in active revolt, despite a dose of pig pills. But god that food was good.

This was just what this cruise was meant to be about. Sightseeing mornings, lavish lunches off ship, late afternoon siestas, and light shipboard dinners.

Since I still felt pretty punk we sat on our patio, and watched the the ship leave the beautiful fijords of Kotor.

We stuck to the balcony at dinner time and ordered room service. I had chicken consommé and half an omelet with plenty of pig pills. We sat and watched the sun set and the moon rise and it was about as perfect an evening as you could have.

Slept with the doors open, listening to the crash of waves. Seductive, lulling, and soporific.