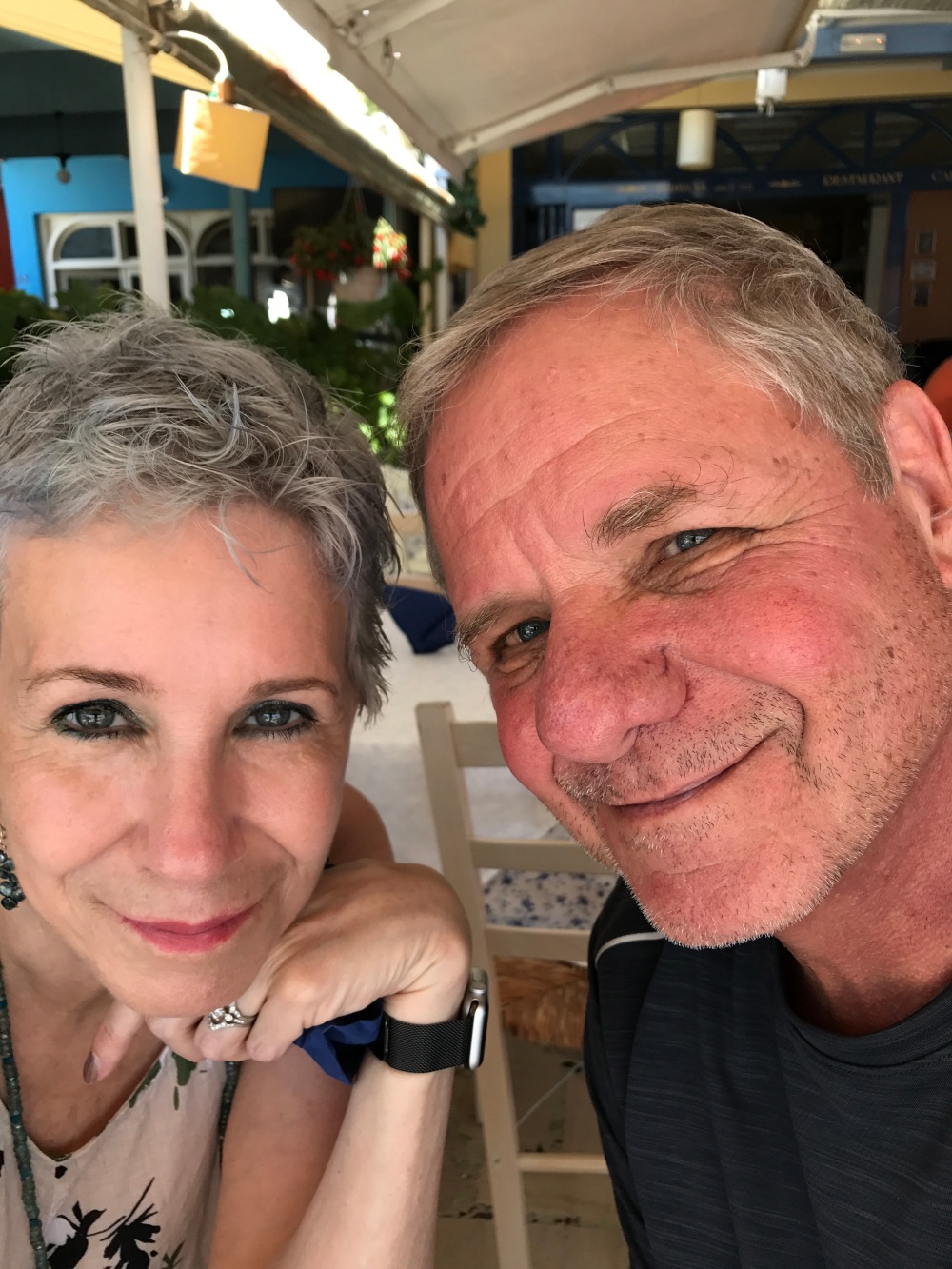 It started out as a secret fling. I was an end-stage grad student in a department where he had recently been hired as a professor and although I was single and he was in the process of getting divorced and our different fields meant that we would never work together, we thought we should keep our relationship quiet.

The main reason was that we never thought it would last. Newly divorced, he was dating multiple people and, at 26, ten years younger than he, I wasn’t particularly mature and my relationship history as a commitment-phobe was spotty, at best. This thing was going nowhere and we both knew it.

So we spent a couple of months dodging around Bloomington, thinking we were keeping a secret that probably everyone knew. When we finally went public, no one seemed particularly surprised. Or interested. As usual, one’s own affairs aren’t nearly as fascinating to others as we think.

So go public we did and for a few years it was a pretty tempestuous alliance. We weren’t exclusive, but we were strangely reluctant to sever ties. After a number of years of an on again off again chaotic relationship of the sort I had grown up thinking normal, I got my act together. Quit drinking (another part of my family heritage), did some serious work on me, and came out the other side as a woman who I, much to my surprise, liked quite a bit.

He was dealing with his own stuff, finally got over the divorce, realized he was ready to make a commitment again. We decided to move in together with the idea that we’d get married after we spent a sabbatical year in England with his two daughters, then 15 and 16.

It was the spring of 1987. I was getting all our arrangements together — passports, plane tickets, and what not. To be sure I had the what not covered I called the British consulate to check on paperwork. They confirmed what I thought — since he had a teaching appointment my fiancé and his kids were welcome in England for a year. “You, I am afraid, cannot come with them. Since you are not married or employed here, we have no guarantee that you would not become dependent on the state.”

Seriously? I argued with her but it didn’t go well. At least, not for me. Although I had been planner-in-chief of this adventure, I was going to have to miss it. I was mad. It took all of my newly found maturity not to kick up a heck of a fuss.

So we talked about it, and somewhere along the line, the notion that we could have a covert wedding to satisfy the Brits, and incidentally facilitate a legal relationship with the kids in case I needed to make decisions on their behalf, and still have the family wedding we planned on our return started to seem less like a goofball idea and more like the only way for me to make the trip.

Eventually that became the plan.

We got our blood tests and snuck (we were good at that) down to city hall first thing in the morning on June 30, 1987. It was over pretty quick and having done it we were having a hard time not telling the world (who still would not have cared.) Leaving city hall we decided we’d become officially engaged so I’d have a ring and something to shout about. A local jewelry store was between us and breakfast so he bought me a sapphire solitaire and we stopped at the Uptown Cafe for a quick celebratory granola and yogurt.

That was pretty much it for the wedding festivities. I had to go off to work at Bears Place, my graduate funding having long run out, and he had to go back to work too and the rest of the day was totally anticlimactic, except for an inner glow that I was sure was peeking out through my eyes.

But I had the legal documents that Britain required.

And wouldn’t you know, no one ever asked to see them. If you are wearing a ring and say you are married, pretty much no one wonders if you are lying. So that clandestine wedding was exciting and meaningful to us, but ultimately unnecessary.

Still, it’s a good thing we did it. That first year of marriage in a new country, living during nonholidays for the first time with my two teenage stepdaughters, was one of the best years of my life. It was also a steep learning curve. There were several moments when, had we not been married, I might have hopped back across the pond. But we were hitched so we hung in there long enough to get home and get married “for real.”

Because we didn’t want to hurt anyone’s feelings that they weren’t invited to the first wedding, we kept the knowledge of it between us, the kids, our parents and sibs, and decided we’d consider the October 29, 1988, wedding the “real” one.
It was splendid — a wonderful weekend of friends and family and a deep appreciation for the ties of love that bind us all together.

And we kept that earlier wedding a secret until some time had passed and we (in other words, I) realized that having two anniversaries a year, and especially two milestone anniversaries was more fun than having just one. More presents, more trips, more celebration, more love.

Eventually, when enough years had passed for everyone to think that the fact we were already married at our wedding was funny rather than obnoxious, we let the news out.

That June morning was a long time ago. We have grown up beyond my imagination — become serious, spiritual people who are deeply committed to ourselves, each other and our marriage. We’ve lost all our parents, other dear relatives, some good friends. I survived colon cancer in ’93, he had quadruple bypass heart surgery four years ago and and now I have a chronic pancreatic problem from a congenital birth defect. Each loss, each illness brings home the fragility and the preciousness of this life we’ve built. I’m 62 now; he’s 72. We’re old and we are okay with that. We are vital, mostly healthy people figuring out next steps.

I am so in love with this guy with whom I have spent more than half my life, and I know he loves me too.

We are lovers, we are best friends, we are coauthors, and coworkers. Would we have stuck around for such an entangled connection if we hadn’t thought at the beginning it was just a secret fling? I have no idea. I might have run away screaming into the night, and so might he.

That was all we could handle at the start.
But some times you tell the fiction that helps you absorb one step before you are ready to take another. And sometimes that’s okay. We still think this is the best –and longest — brief fling anyone ever had.

This cruise we are on is the 30th anniversary celebration of wedding #1 (note: that means we have another coming up in October, 2018. I have a cruise picked out for that winter too.).

We wanted to celebrate the night itself eating outdoors but 1) it was HOT and 2) The Patio was closed. We finagled last minute reservations at the Thomas Keller Grill by playing the anniversary card, and went for dinner at 8:00. 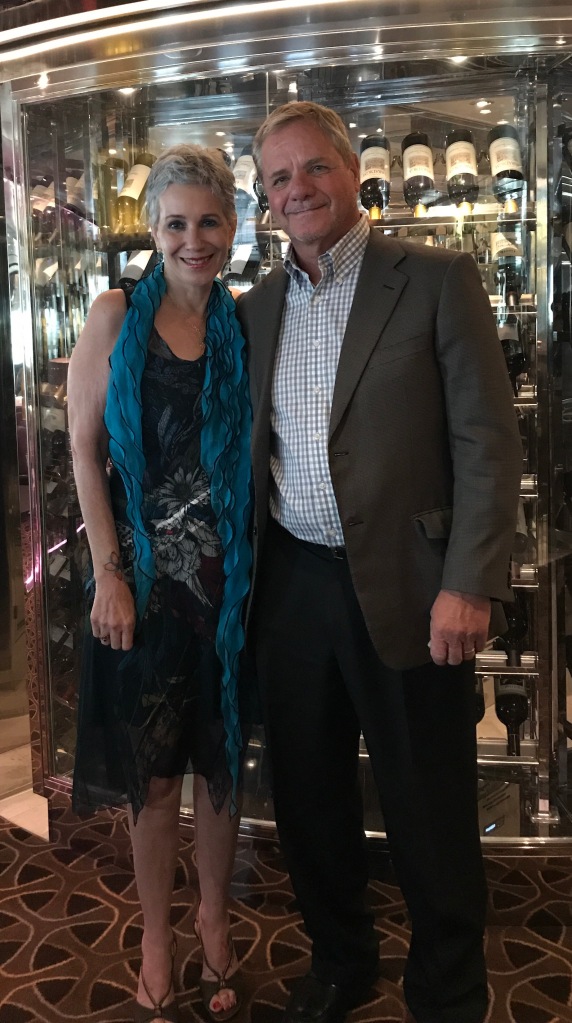 I am still struggling with the fact that I have little appetite and joy in food, so I ordered a Kelleresque caprese salad (meaning yes there were tomatoes, mozzarella and basil, but not necessarily as you’d imagine), an artichoke for my main course and coconut cake for dessert.

Jerry made up for my lack of appetite with a beef twofer — steak tartare followed by grilled rib eye, creamed potatoes, lemony carrots and sautéed mushrooms.

And then having frozen in the air conditioning of the restaurant, we sauntered around the decks in the steamy night air and headed back to our room.

True love had struck there, as well, in the form of two towel swans (mated for life, I assume) and an incredibly rich chocolate torte, of which I could manage precisely one bite. 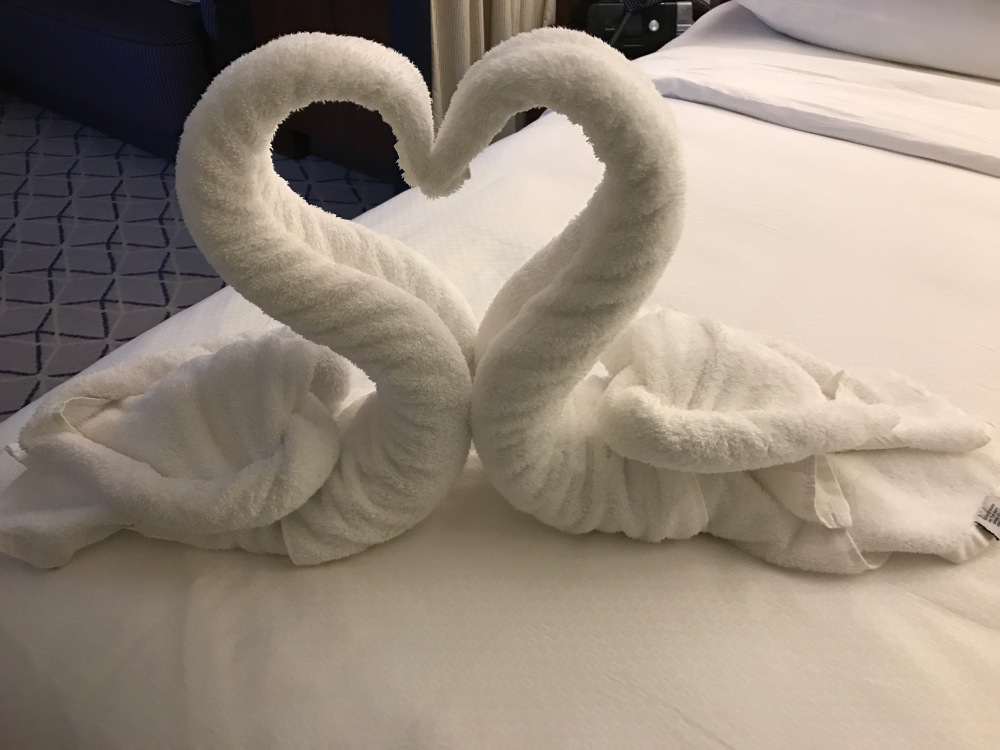 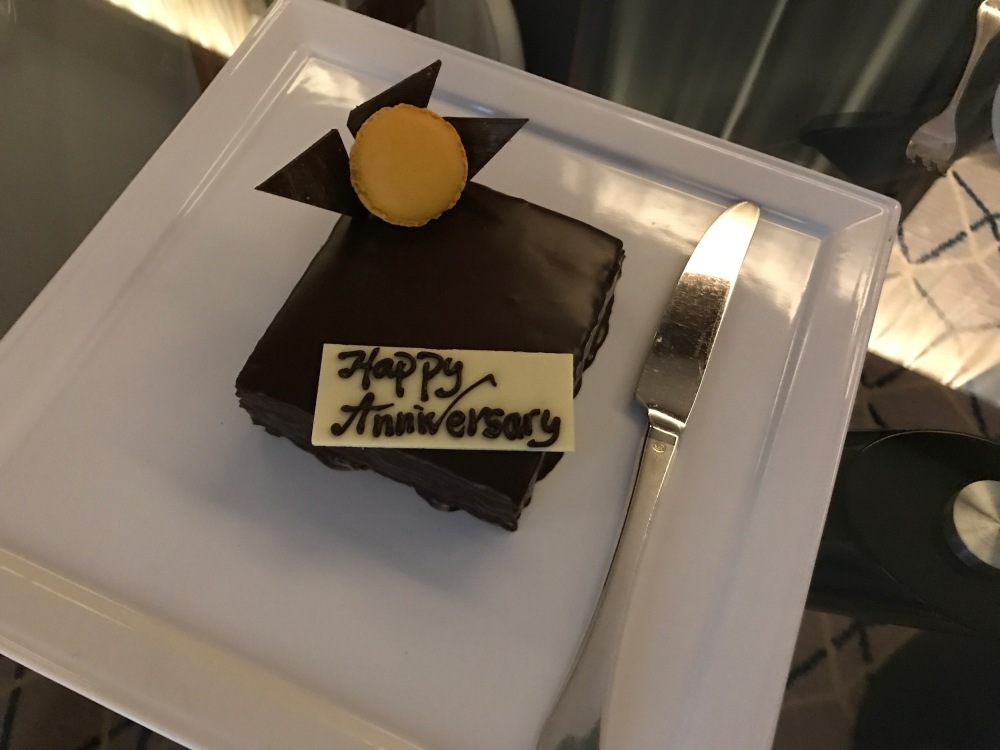 All in all, a pretty fabulous day. Happy anniversary, my love.