So, I spent yesterday leaning on a cane as we hiked around and I got carsick descending into a valley where the rest went hiking in a creek.

Still, it was a lovely day. The cane got me through Little Petra which was really lovely, even if it wasn’t big Petra. 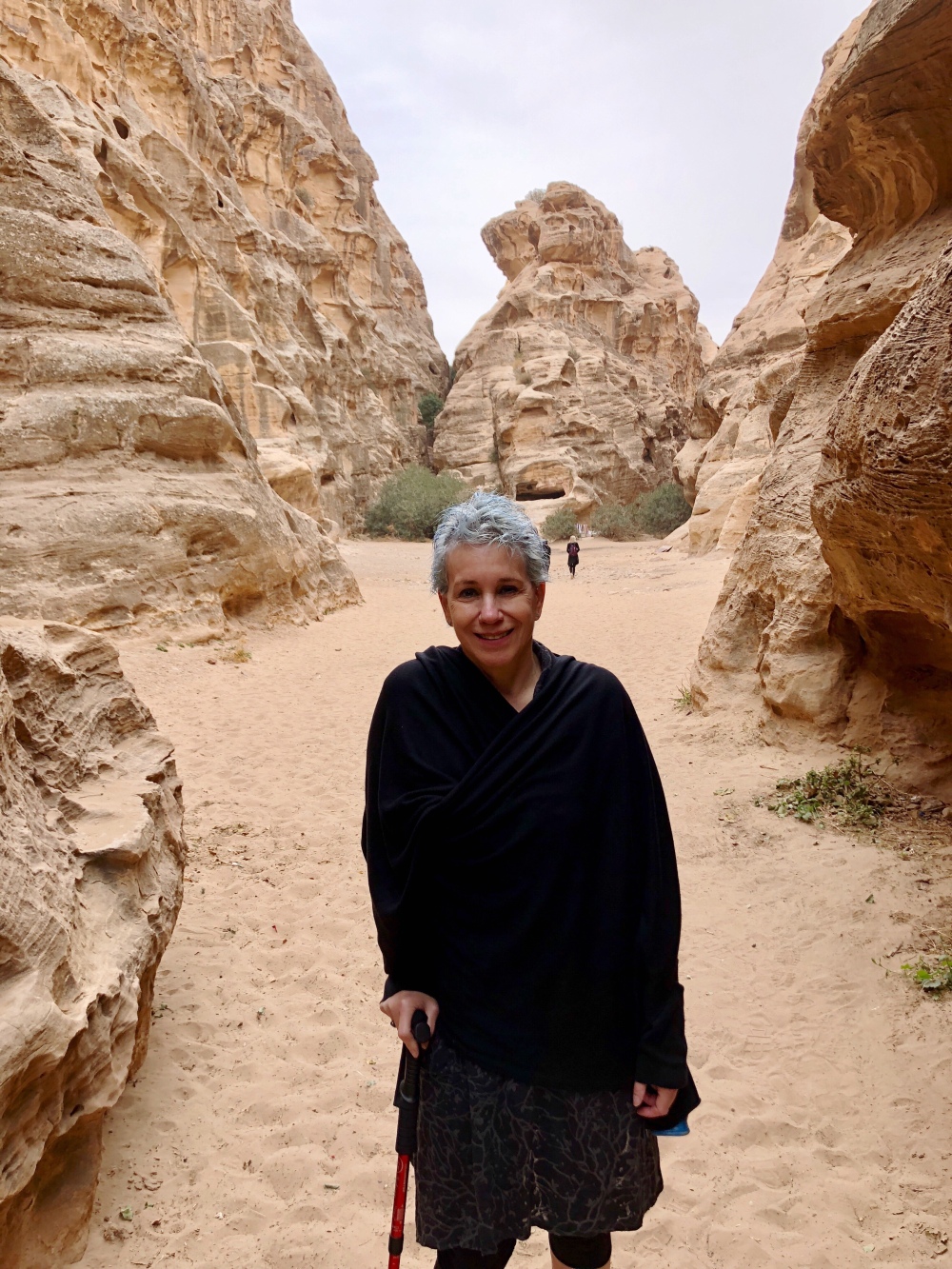 The natural rock formations are deeply humbling, and the man-made buildings carved into rock, with all the architectural detail of the buildings these craftsmen saw on their travels are truly amazing. 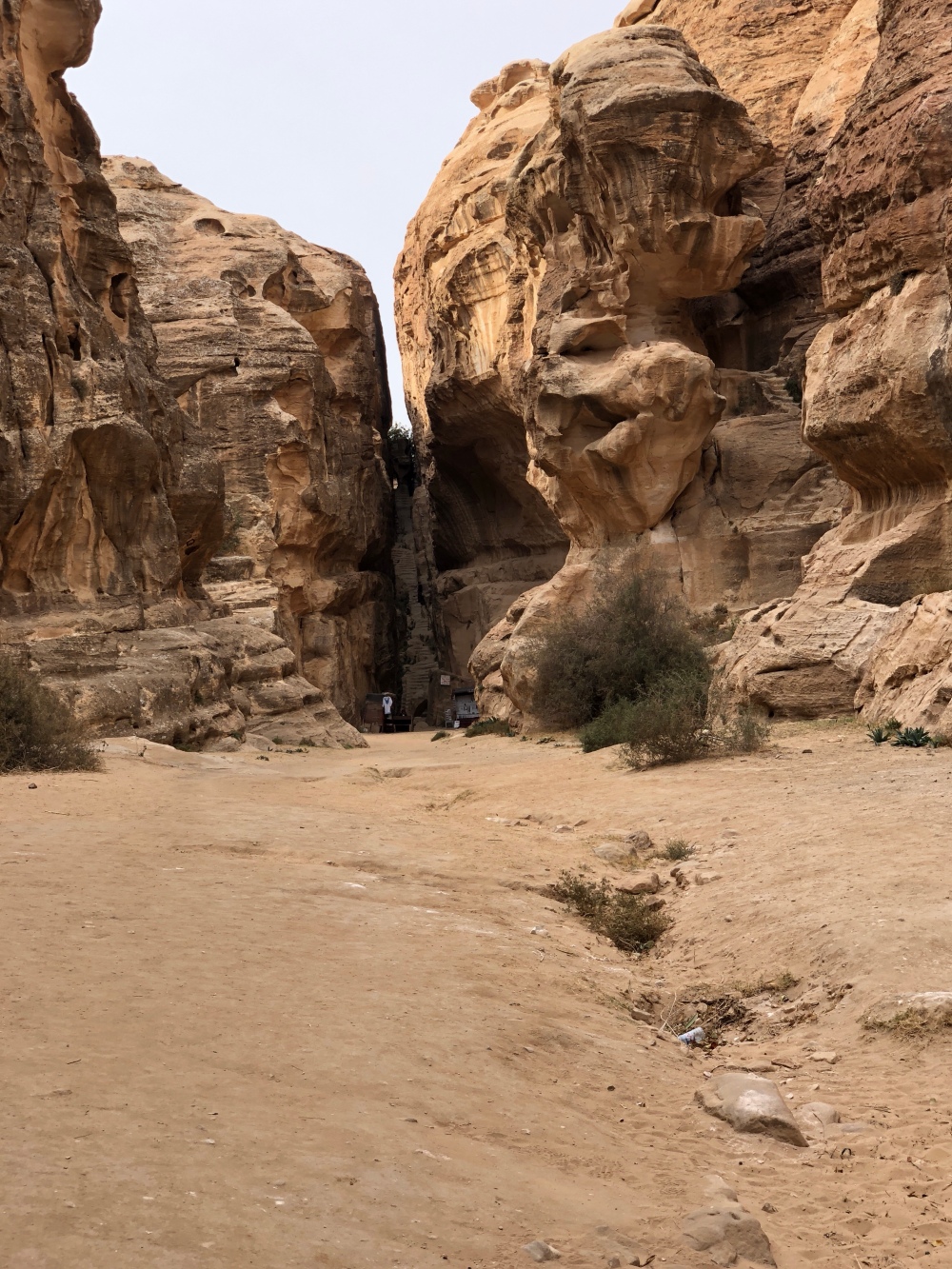 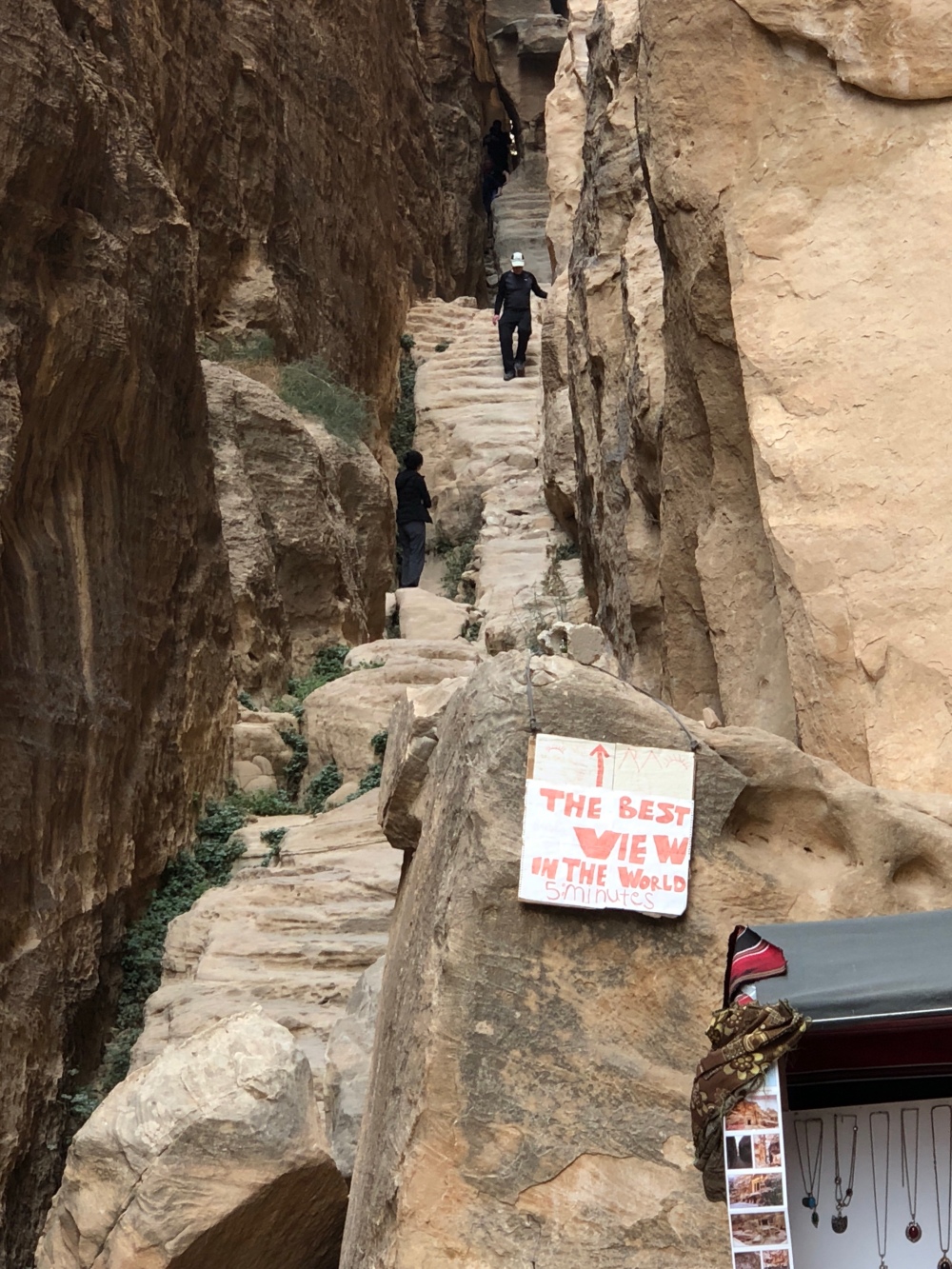 (Only Tom was intrepid enough to see “the best view in the world.” He said it was “a nice view. Maybe the third best.” Such a kidder.)

The next thing on the agenda was to hike a water trail in a wadi (valley) where a creek runs. To get to the bottom of a valley in that part of central Jordan means a twisty road, full of switchbacks and hairpin turns. I was in the third row of seats in the van with my leg propped up and it’s been so long since it happened that I didn’t remember I get carsick til we were halfway down the rocky roads.

I switched up to row 2 and laid down and out a blanket over my head but it was too late. I stayed extremely queasy all the way to the bottom. A kind guide left me a cup of sweet tea and Maria had bought some anise biscuits at a bakery the night before. Those calmed my stomach and I slept it off while everyone else hiked. When they all got back in a couple of hours the world was no longer spinning and the cold sweats had stopped. All good.

As we drove up out the valley I could see why it had made me dizzy going down but boy, was it beautiful. And full of unexpected livestock. Gradually, it got dark. 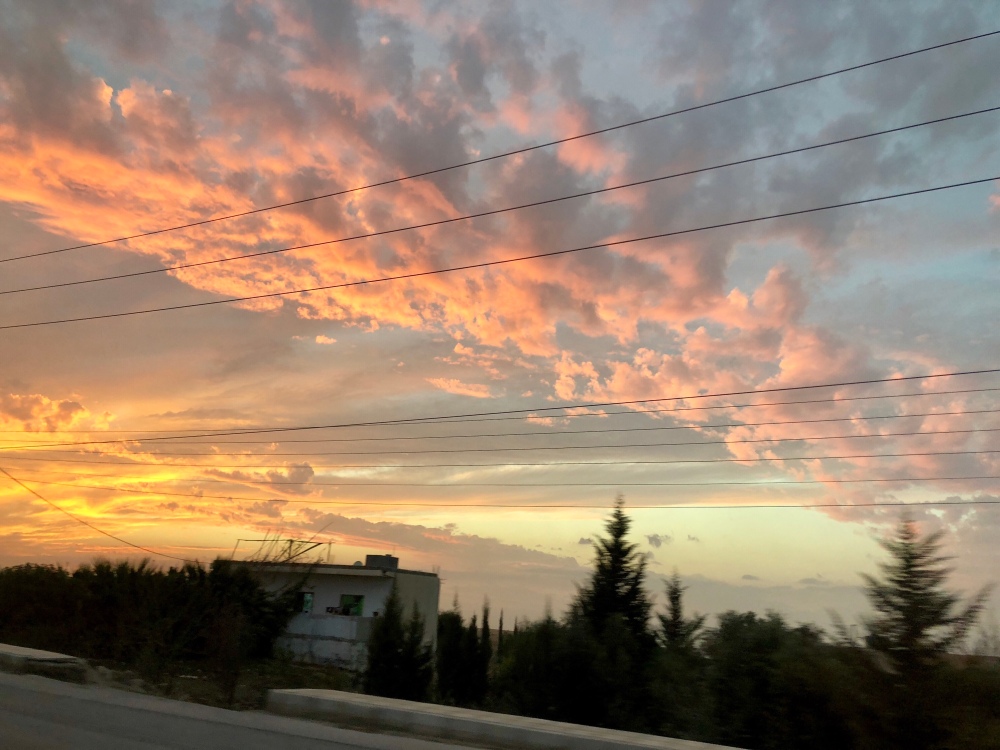 Our driver, Yousef, was superb. Usually to me that means stops at red lights and doesn’t text while driving. In this case it meant stopping a van sliding backward towards a cliff on a steep inline by calmly throwing the emergency brakes on, revving the engine, popping the car into gear and lurching up and over the hill with a sharp turn onto the next road. I was impressed. And thankful. The smell of burning brakes added to the sense of adventure.

We got to Madaba, our home for last night and this, after dark. We were in an eccentric but cozy hotel called the Mariam. Twinkling Christmas lights and the liquor store across the street tipped us off that we were not in a Muslim quarter.

At the advice of the very nice young man who checked us in, and backed up by TripAdvisor, we had dinner at Haret Jdoudna. What a good choice!!!

We walked there, past shops selling everything you need for the finest hookah experience, and bakeries and convenience stores. Also past a large banner declaring Jerusalem the capital of Palestine, a giant Christmas tree and a gorgeous church. 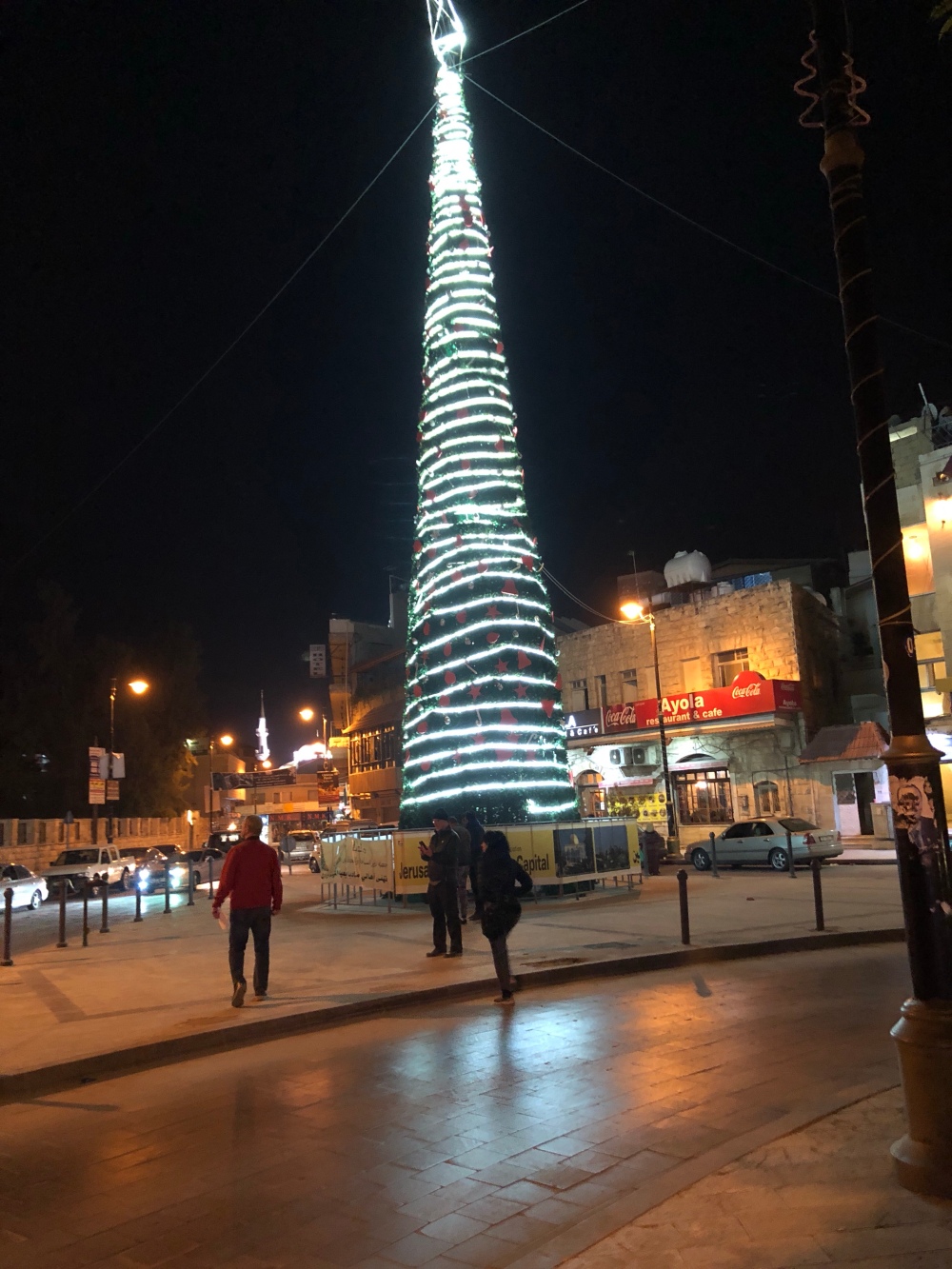 The traffic was a little chaotic but a chivalrous taxi driver took pity on the blue gray lady with the cane and halted his fellows while I got across the busiest street.

The restaurant is in a charming, ancient stone building surrounding a courtyard, a verdant oasis of quiet off the busy streets. I immediately wanted a courtyard of my own, though I don’t live on any busy streets (yet.)

The restaurant was decked out in Christmas with a gorgeous tree and the waiters wore fedoras and suspenders, (a little touch of Indiana Jones and the Last Crusade? Though I am not sure Harrison Ford’s hat was exactly a fedora. And definitely no suspenders.). These guys looked like gangsters from 1920s Chicago. 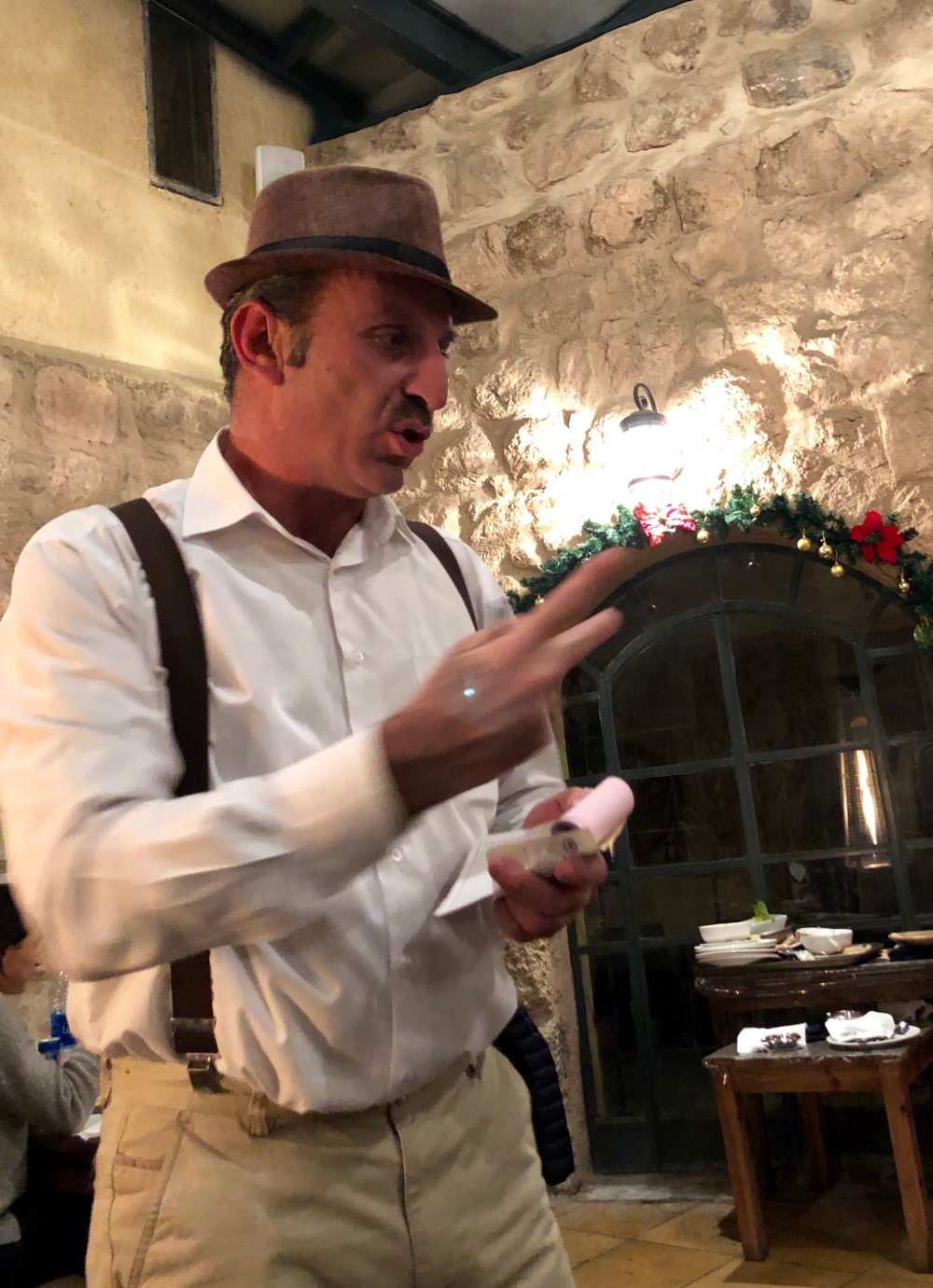 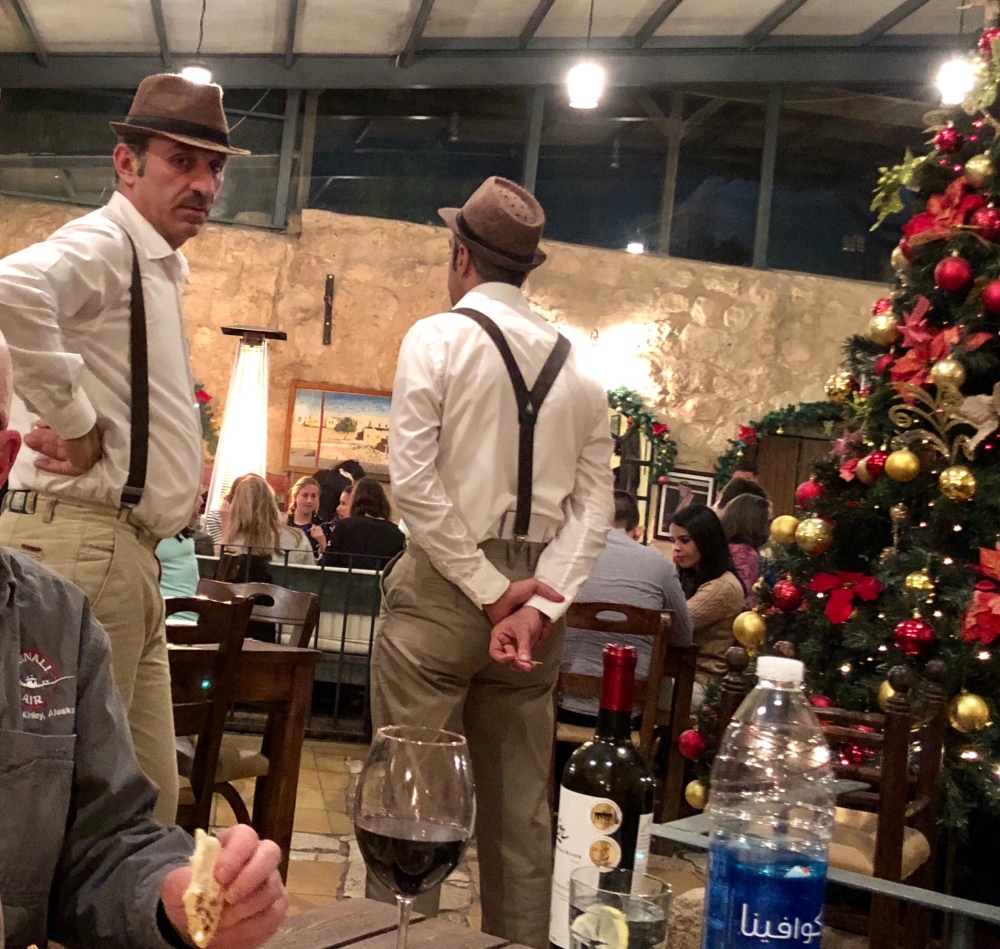 And there was also live music. Two fedora-wearing musicians playing an eclectic selection ranging from Eagles songs to Guantanamera. Also “You Were Always on My Mind,” with an Arabic accent version of Willie’s scratchy drawl. They were delightful. And they never, ever took a break the whole time we were there. (Hoping to get a video from Tom of “Hôtel California” to insert later.)

But the food is the draw. Gorgeous, delicious middle eastern food. We started with a meze of grilled haloumi, stuffed grape leaves, spicy labne, tabouli, arugula salad, and an eggplant salad. 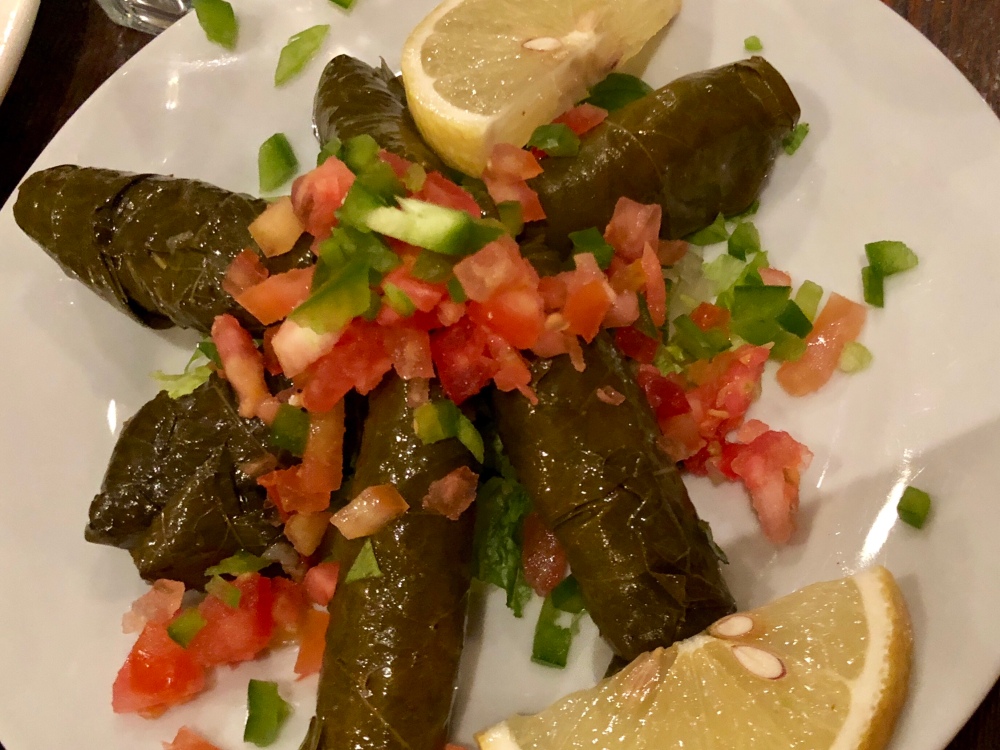 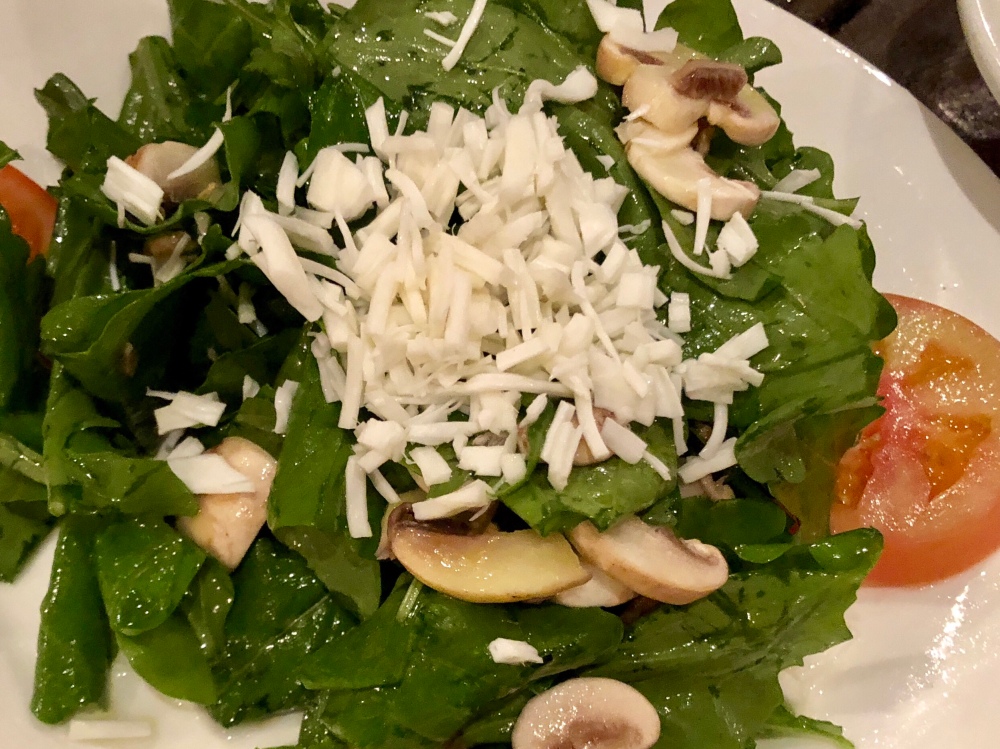 Came with a bread board — wedges of chewy bread that the world now probably calls pita but that I grew up calling Syrian bread and freshly baked and puffy loaves.

Everything was really perfect. I’ve never had labne garnished with chopped chilies before but I will again. The grape leaves were just right, tender and lemony. And Jerry whispered to me that the tabouli just might be as good as his, and his is killer.

We don’t normally order main courses with meze but, well, we did. Gale and Tom had a healthy plate of roasted vegetable, Jerry had a mixed grill, and I had the best thing ever: Makdous Fatteh.

Fatteh dishes have crispy pieces of toasted bread in them — casserole versions of the fresh salad Fattoush. I’ve had them before but this was, well, amazing.

The eggplant was meaty and delicious. The layers of toasted flatbread were very thin. In the yogurt and pine it sauce they were simmered in they became almost like pasta layers. Or tortillas in chilaquiles. Anyway, it was delicious and addictive. I am now on a mission to make it.

For dessert a milk jelly pudding (panna cotta-ish) flavored with rose water which I should have foreseen. It’s a taste I have never acquired — like consuming scented bathwater. Gave it a pass. 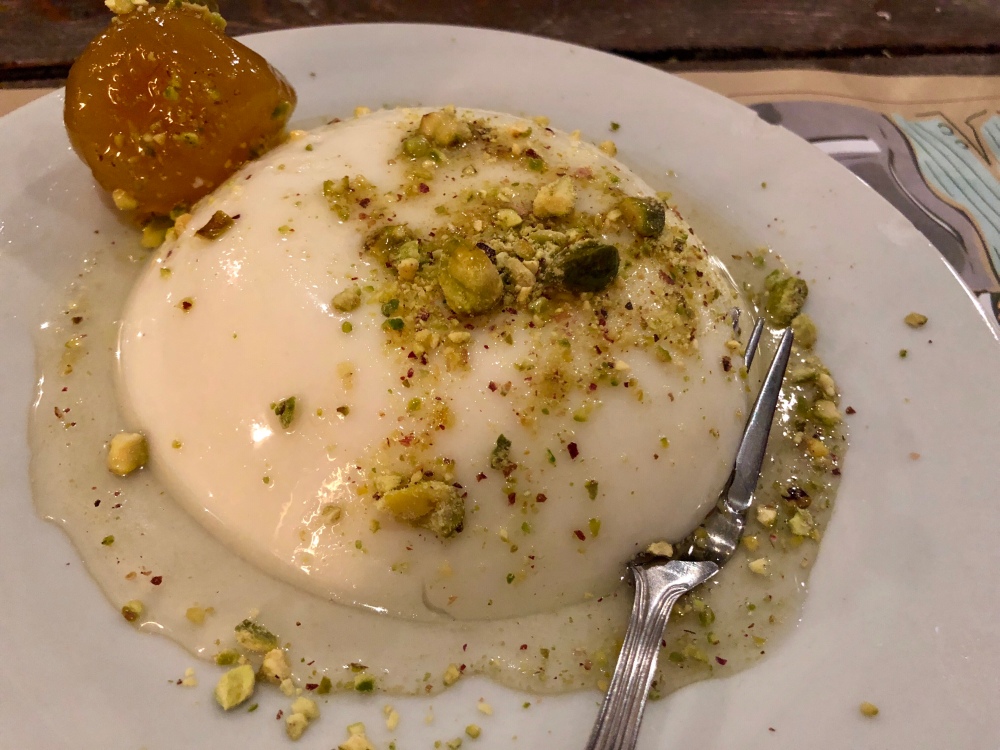 Our stroll home was easier than our trip there, though punctuated by periodic stops for Diet Coke in what is clearly a Diet Pepsi town. And weirdly, the Diet Pepsi here tastes much better. Must be the water. 😊

Back in our room, heat turned on, extra blanket piled on the bed. We both wanted to read for a while but the cozy warmth sent us right off to sleep.