It may be a cruise staple but the galley tour is one of my favorite things about cruising (right up there along with shopping with the chef.)

We stayed on board yesterday. We weren’t feeling too excited about Crotone, I wanted to make a start on a book proposal and J had a review to write. So work we did and I have to say it felt good and gratifying to push my brain, just a little. Wouldn’t want to go overboard though (well, in more ways than one.😏)

The galley tour was scheduled for 4:45 and since dinner in the Restaurant (the fanciest of the dining venues in ship) starts at 6:45, it was clearly not going to be long.

We met Chef Kurt Timmermans outside the galley. He is especially good at these things — personable, funny, and open. When he is enthusiastic his hands get into the act, framing his words and punctuating his sentences.

He’s been with Seabourn for ten years (plus one week, he says) and clearly knows the company well. Although he was discrete about corporate issues, he was heavily involved in the galley design of the new ships, opened the Encore and may take a similar role with the Ovation. All of which is to say, he knows his stuff.

As executive chef, he oversees all the food production on the Encore — from the fanciest (the Restaurant, where night after night he expedites the entrees), to the Colonnade (buffets at breakfast and lunch, fixed menus at dinner) to the sushi restaurant, to the Keller Grill (although all the recipes, equipment and processes there are ultimately Keller’s and frequently differ from what goes on in the other venues), to the much more informal outdoor Patio (where we like to eat.)
He supervises 80 people overall, 61 chefs in total, 25 of them in the Restaurant, whose kitchen we are now in.

Seabourn is a US company and USDA policy guides all food decisions. Kurt says this is handy because the US has the strictest regulations and when they are boarded and inspected by local countries, they are always in compliance.
The recycling post was just inside the door, with bins marked “Paper,” “Plastic,” “Bottles,” and “Cans.”

There is also food waste, of course. The paper is burned and the heat is captured in steam which they use to help power the cooking and cleaning process. The food waste is kept refrigerated, then pulverized into a giant garbage smoothie and dumped 12 miles out at sea. Everything else is kept separate, crushed, and picked up at local ports. If the ports provide recycling bins, it is recycled, if not it goes into a common bin.


Just past the bins is the dishwashing section — a good place for the tour to begin, says Kurt, as most chefs’ careers begin in the same place, an essential learning stage if you want to run the entire kitchen someday. It’s a huge space on the ship and we were introduced to the monster that completes an entire cycle in 2.5 minutes.
The earlier Seabourn ships (Quest and company) had double kitchens and double dishwashing stations but the chefs requested that they be combined from Encore forward — a great idea unless one the monster breaks and the dishes have to be carted up two decks to another kitchen.

We pass the hot and cold appetizer stations, all wrapped in white paper, taped down. In fact, the white paper is lining all the counters where food is plated. This, he says, has been borrowed from Keller (who in addition to the Grill has a menu served every few days from the Restaurant and the Colonnade. There are separate stations where this food is prepared, again because Keller wants specific ingredients and techniques used in anything that comes out under his name.) 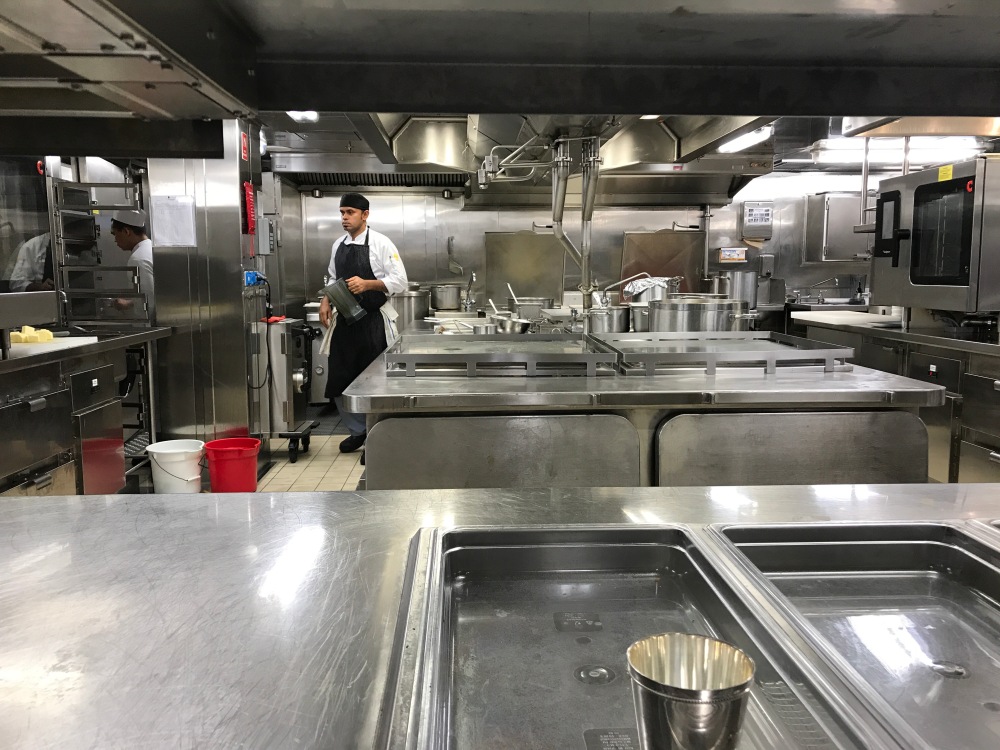 Keller requires the white paper because when you put a white plate on white paper, any drips or smears on the plate (unacceptable!) are much more obvious. The strategy has now been adopted throughout the Restaurant. It also encourages the chefs plating the food to work cleaner and at the end of the night, the chef with the cleanest paper gets a reward (in the form of chocolate.)

The pastry section is next, home not only to the hundreds of desserts produced nightly but to the fresh bread that is baked before each meal and to the renowned Seabourn breadstick. They go through so many breadsticks on Encore that, to share the burden, Chef Kurt has every one of his 25 Restaurant chefs prepare five trays of them every morning.
And then the main entree section. Here is where incoming orders, typed in the dining room onto iPads, produced printed orders that Kurt calls out. There is a separate chef for each entree. Last night that means a chef to cook the dorade royale, one to cook the sirloin and short ribs, one to cook the pan seared jumbo sea scallops, etc. Every order that is called out is prepared within two minutes of completion.

When Chef Kurt in his role as expediter calls for pickup, he uses each chef’s first name so none can miss it and they have two minutes to get the dishes, all cooked to the correct temperature, on to the plates. It’s a complex, carefully choreographed performance, and it takes place night after night.

Not only does the executive chef expedite in the restaurant but I have seen him in the Patio at dinner time and no doubt he makes the rounds in the other venues as well. He does the shopping for fresh fish, produce and cheese on land when he can, and orders all the other food to feed 600 passengers and 400 crew (and by all reports, the crew eat very well too.)

There is a warehouse in the Netherlands from which the Seabourn ships get the bulk of their food (butter pats and jars of jam are cheaper if they are ordered in yearly amounts, but all that food has to live somewhere.). The ship’s executive chefs order supplies from the warehouse to cover two week blocks. If the ship is in Europe, orders from the warehouse take only a couple of weeks to meet them in port. If the ship is in Asia or Australia or somewhere further afield, the order has to be calculated and submitted 2 and a half months in advance. 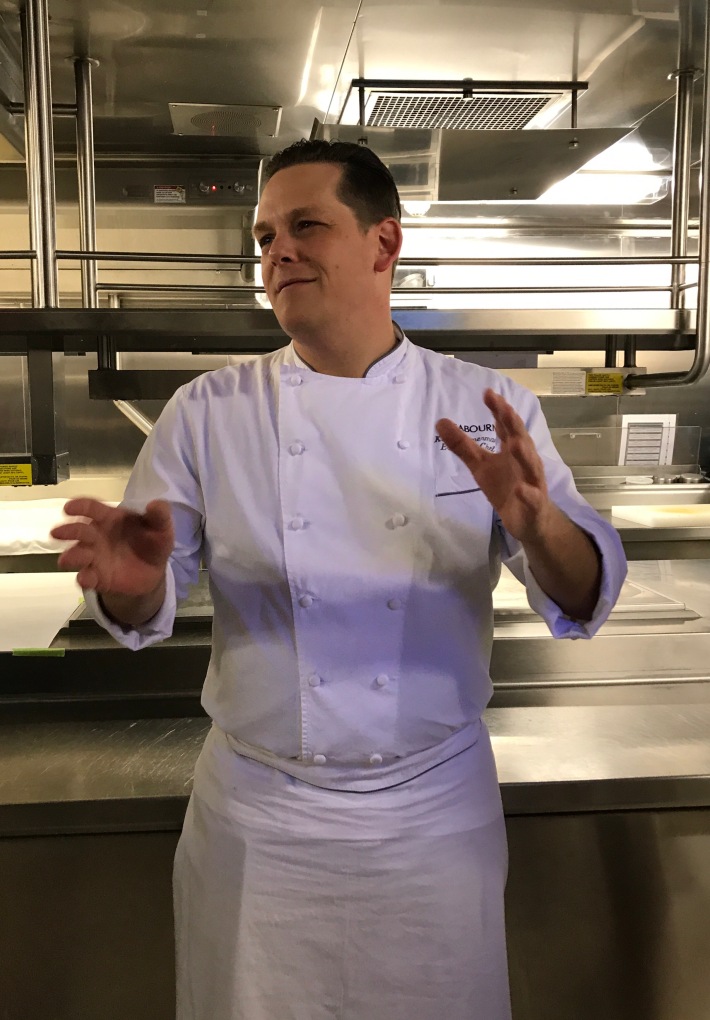 What needs to be ordered is a complicated formula based on variables that are not always available in advance — demand for certain foods, weather determining where people choose to eat, the length of the outside excursions passengers take and how tired they are when they return. A computer helps out but the executive chef’s brain is responsible.

It wears him out eventually, especially when work days stretch to more than 13 hours. But the schedule suits Kurt. He is on the ship for four months, home in Belgium and South Africa for two, and then back on again. He spent a couple of months in Seattle as Encore was being designed, had the harrowing experience of being in on the launch, and then the “pre-inaugural” cruise we were on from Dubai to Singapore last Christmas. The ship’s “inaugural” trip, launching on January 8th with bigwigs like Keller on board wore him out. When his 4 months was up in February he was full ready to be shipped home.

The tour has been fascinating. We’ve been plied with caviar and champagne. We’ve learned how dinner gets served, what happens when the kilos of fresh pineapple you’ve ordered for a cruise are not ripe, and the process of designing a kitchen from scratch for a new ship, and what happens when things go wrong and need to be fixed.

But the clock is ticking. Dinner service begins in an hour and 15. Smoothly Chef Kurt brings the tour to an end and gets back to work.
We are generally not fond of eating in the restaurant. It’s beautiful but big and formal. It is definitely “going out for a fancy dinner” as opposed to stopping in your neighborhood outdoor bistro.

On the other hand, it’s the only place on ship outside of room service (which is run from the same kitchen) where you can get the Seabourn breadsticks. Our cruise ends in a couple of days, the menu looks great, and we’ve just seen the guts of the operation, so to speak. We decide we should eat there at least once.


There was a Keller menu that night with a vegetarian option that looked great, but the dorade royale that we shopped for was there too.

We both ordered our first course from the Keller menu — a blistered heirloom carrot salad with dates, finger lime, and coriander. Fabulous. The tart little limey buds were perfect accents to the sweet sweet dates and the caramelized carrot.


For a second course we moved to Chef Kurt’s menu. Jerry had a salad of bibb lettuce and three peas (English, snap and pea pods) — fresh and delicious. I had two fat polenta battered jumbo shrimp with fennel slaw and romesco sauce. The shrimp were fine, the slaw and sauce were superb.
Mains. I had the dorade from Corfu market with curried tomato couscous, fried red onions, tomato beurre blanc and some broccoli slivers. The fish was fantastic but post breadsticks I was pretty full and couldn’t do justice to the rest.

Jer had the sirloin and short ribs on mustard greens with roasted potatoes and asparagus (he did a little mix and match with the sides. The chef intended the meat to be eaten with honey-glazed turnips.)

And finally, dessert. Jerry had a saffron panna cotta, forgetting he doesn’t love saffron, especially in desserts. I had a fabulous hot tangerine soufflé with creme anglaise. Citrusy and eggy — like French toast without the toast. Probably not high on the pancreatic diet but I took my pills and loved it anyway.


A few sweet bites to finish off the night with Jerry’s coffee and we were done. Three decks up by elevator and shortly to bed.