We are off the ship now. It was lovely, lovely, lovely, but it’s great to be in Rome. I am eager to go home in a couple of days. This vacation was exactly the right length, but that will be another blog post at another time. This one is mostly food.

Yesterday (still on the ship) we took a tour in Amalfi to the Emerald Grotto. It was kind of a nice boat ride to get there but much ado about nothing when we arrived. 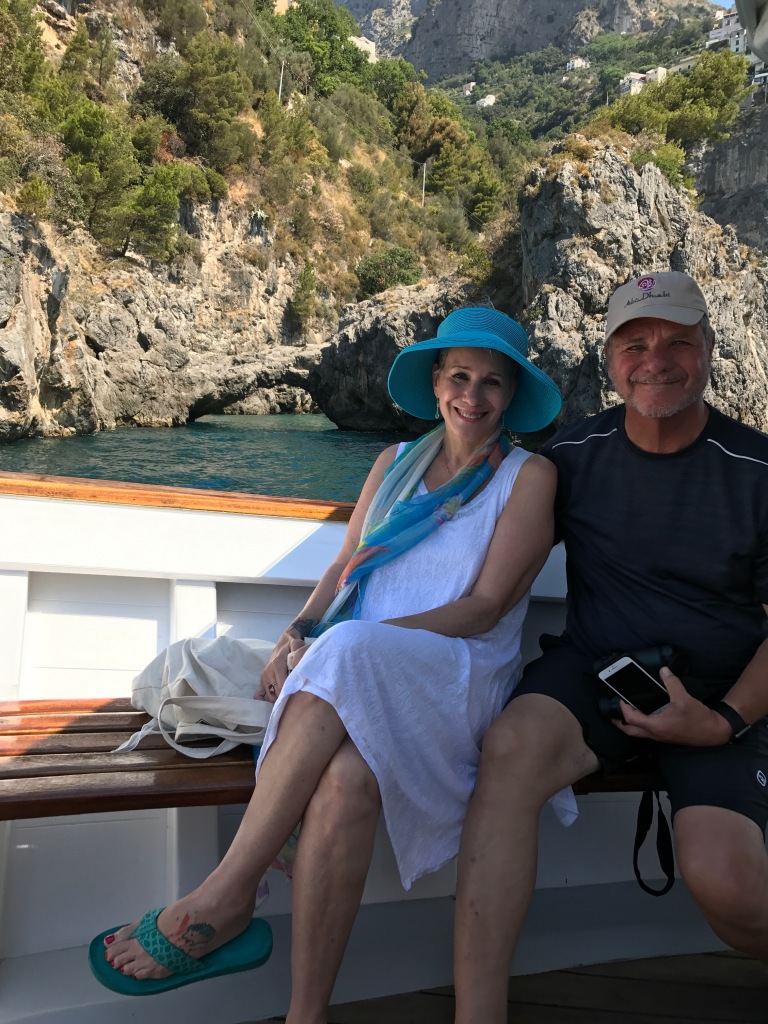 Compared to the Diros Caves we visited outside Sparta, this was not very impressive. One big cave with some bluish light filtering in. I know emeralds. Emeralds are a friend of mine. And believe me, Grotto, you’re no emerald! Very anticlimactic.

However, there was lunch. After a little internet research we decided to stop at the Ristorante Marina Grande, right in the center of the Amalfi seashore (that way we didn’t have to take a taxi on any of those hair-raising roads along the coast.)

It was a brilliant choice. We were early enough to get a perfect seat right next to the beach where many, many bodies were being broiled.

We however were in cool shade, indulging in a fabulous lunch.

It started with a gift from the chef — a few mouthfuls of spelt salad with mozzarella that was delicious. The kind of amuse you want a whole bowl of.

I also ordered a langoustine with pumpkin purée because it had an eggplant ball with it. (We’ve been through all the eggplants don’t have balls jokes, thank you very much.). It was fine, but the least splendid part of the lunch, although still splendid.

For main courses we split two dishes: the finest eggplant Parmesan I have ever had the pleasure to eat and linguini with zucchini and basil oil. Both were great but that eggplant, my God! I have tried to figure out what was so good about it and I think it must be ingredients. This place was all about Slow Food and mentioned the provenance of the ingredients where possible. So the cheeses, the sauce, the eggplant itself were all perfection. It also didn’t try to do too much. Two slices of lightly breaded, fried eggplant sandwiching some lovely mozzarella with savory sauce and parmesan on top.

I ordered the millefeuille with lemon cream and fruit for dessert but before it arrived we got the pre-dessert: an astoundingly intense scoop of peach mousse with a luscious strawberry stuck in it. Essence of peachness and strawberriness.

My millefeuille was really, really good. Not made with puff pastry but with fried (I think) pastry layers slathered with lemon cream and fruit.

We got packed up early yesterday and had a leisurely early morning and met our driver on time. One of our drivers, I should say. Due to a travel planning SNAFU, we actually were met by TWO drivers for the hour or so ride into Rome. Still trying to straighten that out.

The stress-out over that and the strange mealtime of early morning breakfast threw my stomach or my pancreas or something into a tizzy. I was in a fair amount of pain, took some enzymes and a pain pill and choked down a protein bar and took a nap. I was out for about two hours and woke up seriously sick. More pain pills and waited it out and eventually felt marginally better.

Cautiously, we decided to keep our dinner reservation at Piperno in the Jewish quarter. It is one of several places renowned for their fried artichokes, a specialty of the neighborhood, and I was determined to eat one. Really determined.

We had booked a seat outdoors and it was a lovely place to eat, in a tiny secluded piazza. Our reservations were for an unfashionable 8:00 which made us the first ones there, though by the time we left the place was packed, largely with locals.

We started with two artichokes each. Yes, that’s a lot, but I didn’t want to share. I have read and dreamed about these artichokes for decades, made them myself with baby artichokes, but never had a full adult sized artichoke fried until the outer leaves were crispy chips and the heart was an unctuous, melting joy.

They were all I’d dreamed of. Absolutely delicious — full of artichoke flavor but also a combination of textures that kept the mouth on its toes (so to speak.). It was heavenly.

I also ordered fried zucchini because ordering too much food is what I do. It was fine. Not earthshaking, like the artichokes.

Our main courses were pasta. Tagliolini with tomato sauce for me, perfect after the richness of the artichoke. Jer had the pasta carbonara because it is supposed to be good. It was — incredibly rich with egg, strong Parmesan, and crispy lardons.

We split an order of slivered artichokes sautéed in garlic and oil — meaty and good but eating the bristly choke, no matter how cooked and crunchy, took some getting used to. Artichoke whiskers kept getting stuck in my teeth. Yummy though.

And we also had a green salad and it was a masterpiece. Some of the best tomatoes I’ve had in ages and perfectly dressed with olive oil and vinegar. It was simple and fantastic.

It was finally getting dark and the patch of sky above us was a deep blue velvet.

Under the emerging moon and stars we split dessert — fraise de bois with vanilla gelato. Again, knocked out of the park. The strawberries were super intense, the combination magic. Fragrant, sweet essence of strawberries and cream. I shouldn’t eat ice cream and though the ship had ice cream opportunities all over, I abstained. But this! I am glad I broke the rules. Just beyond the imagination.

Strolled home in the moonlight by the river. A glorious evening, even if it did take pain meds to make it happen.

Hello Rome! It’s been a long, long time, but I am so happy to be back.