I have a cold and wasn’t up to snorkeling or being hot so I slept away the day that Jerry, Gale and Tom went to the Great Barrier Reef. By all accounts it was a great day but the greatest part was that my husband, who seems to have a curse on him when it comes to catching fish in his own backyard, scored an 8-9 lb green job fish.

A green job fish may not sound like all that much — when you google it you get a lot of listings for environmental positions. This story is interesting but Jerry line caught it. No spear fishing in the reefs for him. Apparently it is a star of the waters over the GBR. A sports fishing person’s dream, these guys are not only hard to win trophies but they are fantastic eating fish.

I mean, fantastic. The guys on the boat cleaned it up and sent him home with two huge fillets. This is when you are glad you are in a VBRO with its own cooking facilities and not in a hotel. Jerry barbecued one with salt, pepper and lemon and we scarfed it in 5 minutes with a delicious spicy mango salsa Gale made. So he decided to cook the other and we are that as well.

What made that fish so good? Delicate white flesh that broke into huge flakes. Mild, it tasted like fish without being fishy, if you know what I mean. It was probably up there with my other favorite fish, triple tail, but a lot less likely to come my way. Fabulous dinner. Bravo Jerry.

Then yesterday, due to a funky internet, we checked out of the house early and went to stay at the Shangri La in Cairns. It was a bit tired for a Shangri La but the internet was great and I had papers to grade.

Come dinner time, Gale and Tom made reservations for a perfectly good looking restaurant, but as we sat on our balcony overlooking the marina, we saw people heading to three old boats tied up together advertising beer and prawns. 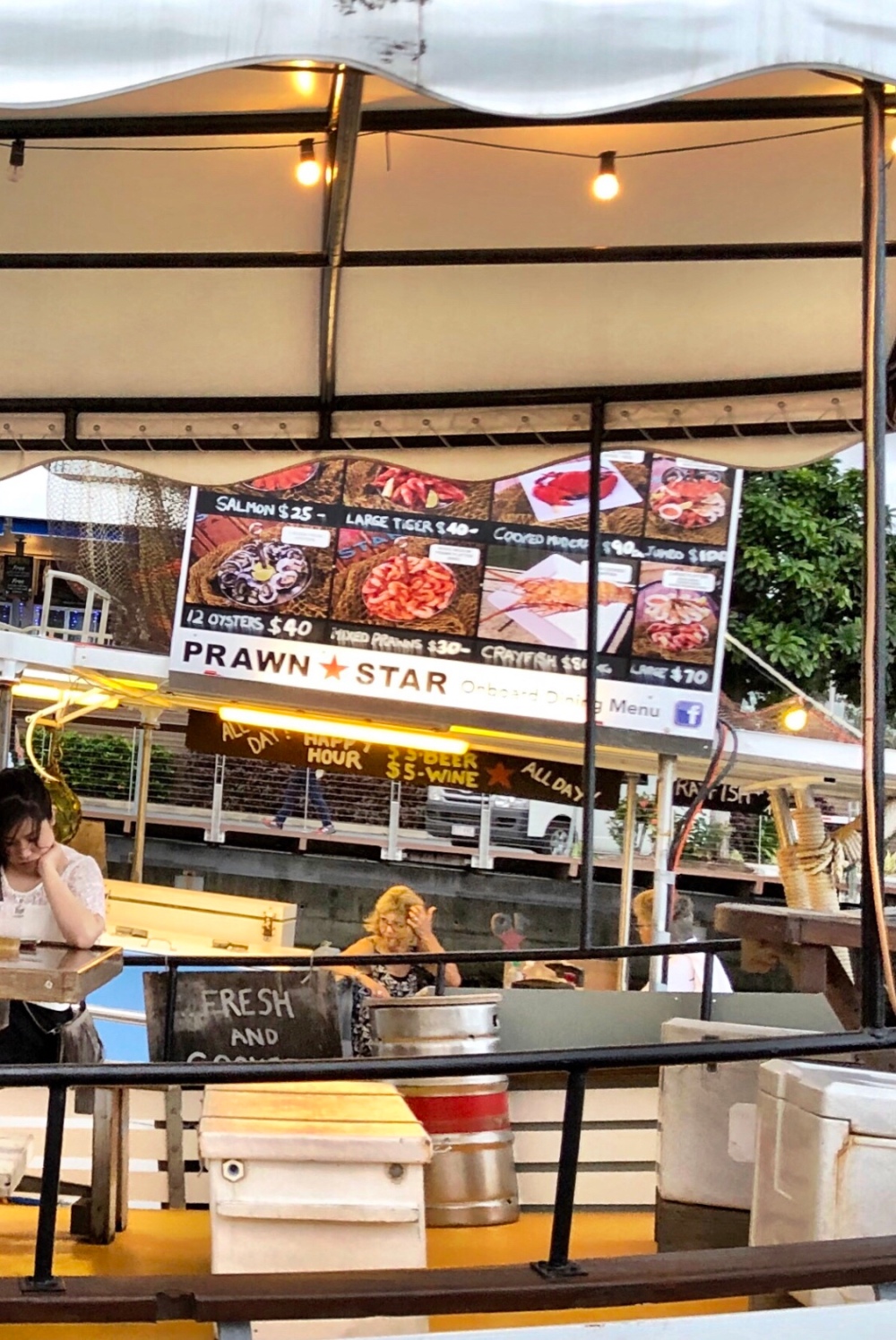 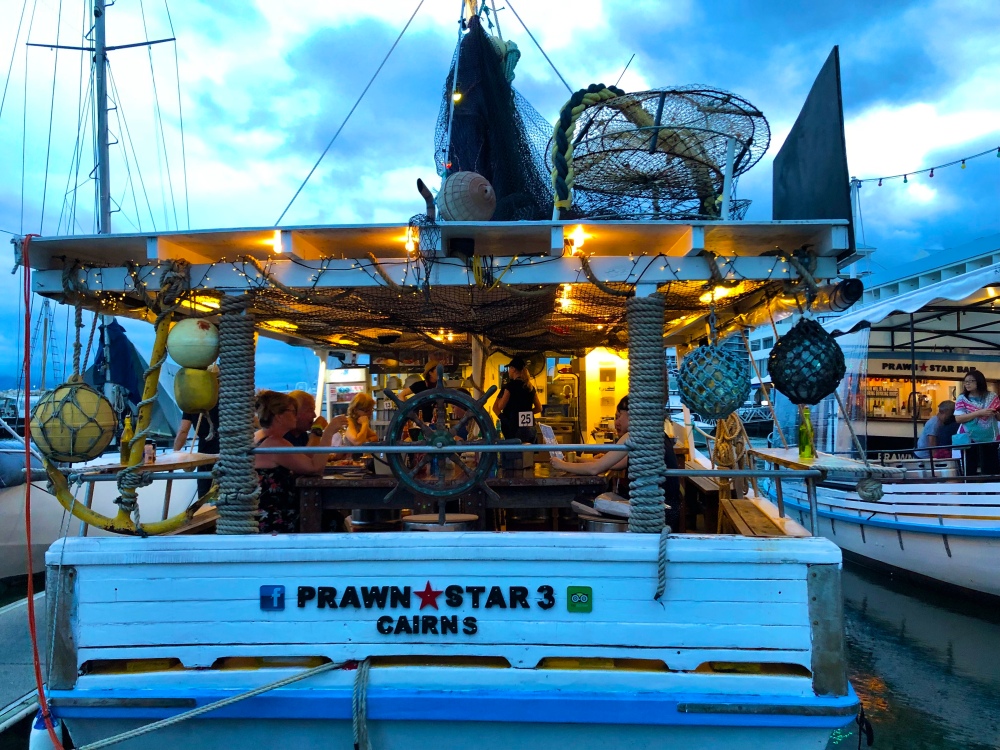 They didn’t have much more than that but it was informal and friendly and right outside the hotel. I googled Prawn Star and the reviews were beyond stellar. People wanted to live there forever.

So we went. Simple, rustic, Not much choice — they do one thing and they do it well. Beverages included ginger beer (yay) and Fanta. Also real beer, a low alcohol version and one even weaker (“what’s an IPA?”asked the waitress. I wanted to hug her.).

For food there were oysters, big prawns, smaller prawns, huge crayfish that looked a cross between a monster lobster and a squid. We didn’t have that. 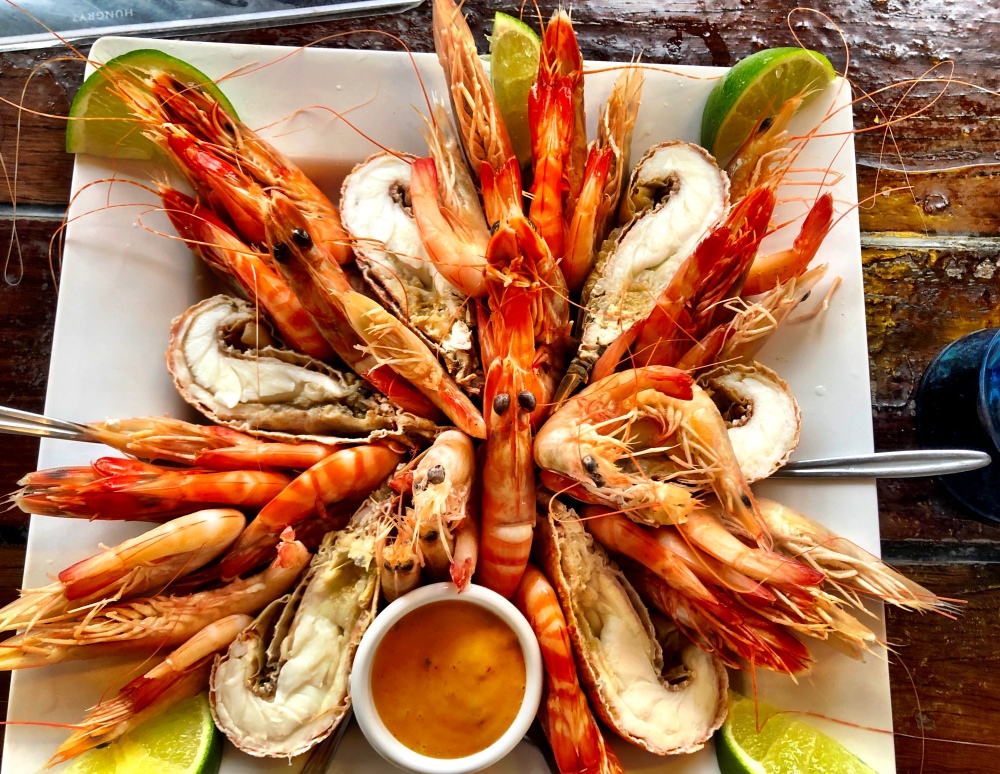 We had instead a captain’s platter. Prawns galore and something called Balmain Bugs that inhabit the Australian waters off shore. I am not normally a bug eater but these guys looked like flat little lobsters (in fact they are a variety of slipper lobster, whatever they are.) No claws, but incredibly delicious. I am not a lobster fan – too often it’s tough and I’m not a fan of all the work you need to do to eat it. And I hate the texture of the spiny lobsters we get in Florida.

But bugs!!! The easiest crustacean I’ve ever eaten. They arrived on the giant platter split and you just pluck out a big chunk of white meat with no fuss or wrestling or bits of shell left in the meat.

They served it with “cocktail sauce” which I would call pickle-less Thousand Island Dressing. Gale and Tom added Sriracha. I just wished it were lemon and butter.

Because honestly, these bugs were as delicious a shellfish as I have EVER eaten. Meaty texture — not crunchy, stringy, mushy or rubbery. Just smooth, firm, toothsome white fish. And flavorful!! Slightly salty, a bit sweet, and just gorgeous. I don’t have a large vocabulary for fish flavors beyond “fishy” and “too fishy” so these were a revelation. Could have eaten them all night.

The prawns were also great but a pain to eat — all the eyes-looking-at-you head-removing and deveining (I don’t like the grainy texture of prawn veins.) And all the little feet to pick off.

They were delish but it’s clear that I am a born again bug lover, plain and simple. Only problem is the 15 hour flight that leads me to them. It might be worth it. I wonder if we could smuggle them back to our bay along with some green job fish.

Boy that was some dynamite fish eating. On a three hour flight into the outback now. Thinking the fish might not be as plentiful there. 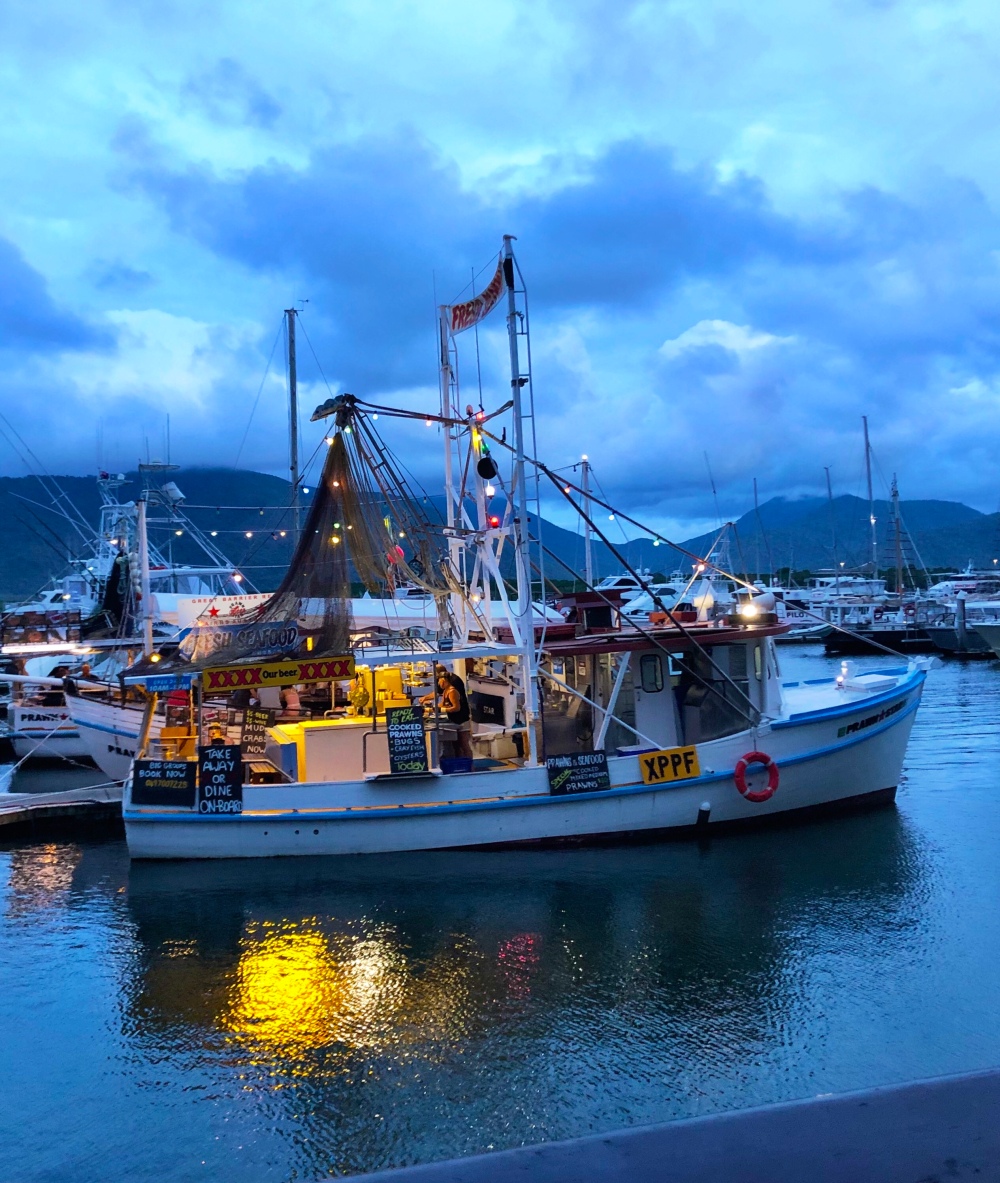